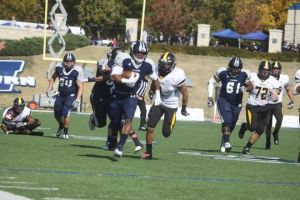 Rarely at the collegiate level does a sophomore step in right away. That is exactly what junior linebacker Bryce Atagi was able to accomplish last year.  Atagi started all 13 games last year. Coaches expect Atagi to improve not only upon his performance from last year, which was very good (101 tackles, 10 tackles for loss, and 3.5 sacks), but also to step up and be a leader for the team.  So far that is exactly what he has been doing in fall camp.

“I feel that camp is going great.  People have been working hard.”  said Atagi.

Atagi has also been very satisfied with the work the players put in during the summer as well.

“We have been doing extra conditioning and extra lifts inside the weight room,” said Atagi. “Everyone is focused and ready to go. The team that is in the best shape will end up winning the ballgame.”

Strength and conditioning coach David Trupp was impressed with the dedication his players had to the weight room this summer as well and he had Atagi at the top of his list.

“We had many guys who were in there everyday wanting to get better,” said Trupp. “Bryce was one who was always working to meet his goals.”

The defense returns eight of 11 starters from last year and aims to be very formidable against opposing offenses.  Much of the success will rely on Atagi.

Atagi is quick to give praise for his success to his teammates especially the defensive lineman.  He also expressed the enjoyment he gets playing alongside fellow linebacker Jahmil Taylor.

“He is one of my best friends on the team,” said Atagi. “Everywhere we go we are always together.”

This friendship has brought  added benefits on the field as well.

“Whenever we are on the field together, we are always on the same page and know what each other is doing.”

Atagi originally was recruited to Washburn to play safety and once he was on the team made the transition to middle linebacker.  It was the right move as he has done nothing but shine at the position.  His road wasn’t an easy one but the extra work in the weight room has paid off immensely.

“I always knew that if I worked as hard as I could, that I’d be on the field and I just pushed myself and eventually got on.”

Washburn’s defense will be tested early and often and they start the season with a challenge when they meet No. 17 rated University of Nebraska-Kearney on Aug. 30 at home.  This will be the first test for the Ichabods and will just how far they have come from last years amazing season.

“I like to lead the charge and be loud,” said Atagi. “Hopefully everyone rallies through that.”

Atagi will look to lead a physical defense this season as the Bods look to improve upon last year’s success and complete their “unfinished business.”