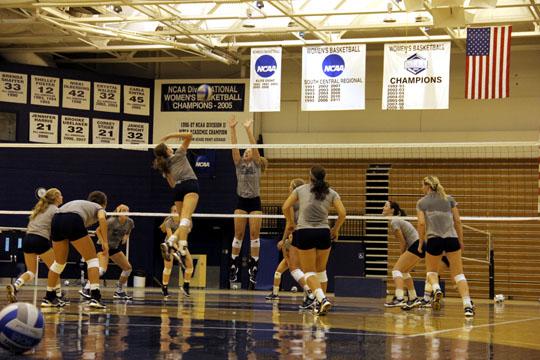 An integral part of the Washburn volleyball team this season will be 6-foot senior middle hitter and right side hitter Jessica Fey. The product from Crete, Neb., returns after a star-studded junior year where she was named an honorable mention All-American by the American Volleyball Coaches Association.

“Even in the little games we play she gets really into them and doesn’t want to lose,” said junior Sami McHenry. “She wants to be the best she can be and I can trust her when she is on the court to do her job.”

Fey was a four-year letterwinner in volleyball, basketball, and track & field at Crete High School. She saw action in 36 matches while earning 13 starts as a freshman for the Blues. The past two seasons, Fey has garnished second team all-MIAA honors. This year Fey will have to help new underclassman fill in for the graduated Breanna Lewis and Mollie Lacy.

“Fey is a great leader for our team and is our only returning All-American and we depend on her a lot,” said senior outside and middle hitter Jessica Kopp. “She is a great player and it is an absolute blast to play with her. I’m looking forward to our last year together and hopefully we can make it our best one yet.”

Expectations for the 2012 season are high for the Blues and Fey who are coming off of a 32-3 season.

“I am a very competitive person and I absolutely hate to lose. It doesn’t matter if it’s on the court or a board game. I want to win,” said Fey.

Fey’s passion for volleyball has been with her since she started playing the sport.

“I started playing volleyball when I was in fifth grade. Since about eighth grade I’ve played volleyball 11 months out of the year,” said Fey. “It’s very time consuming but 100 percent worth it.”

Last season Fey ranked third on the team with 316 kills playing in 35 matches and starting 22 as a middle-hitter. Fey had her second career double-double Oct.1 against Angelo State with 16 kills and 11 digs and reached double figures in digs three times with a season high of 12 on Nov. 5 against Pittsburgh State. She had five or more blocks five times.

“I’ve had such a great experience playing here at Washburn, and I’m looking forward to this season,” said Fey.