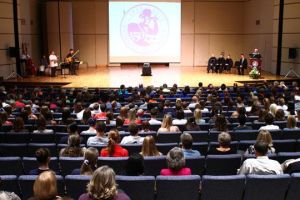 Washburn president Jerry Farley, anthropology departmentchair Margaret Wood, and student body president Eric Benedict gave speeches welcoming the freshman class and explaining some classic Washburn traditions. Benedict echoed the faculty sitting with him, as he talked about the past, present, and future of Washburn.

“Our future includes you, and most certainly depends on you,” said Benedict.

Farley was met with applause, and addressed the room casually. He also spoke about being flexible and independent.

“We encourage you to explore and to sample… to try new things,” said Farley. “That’s what college is about.”

Farley continued to talk about “discovering new things about yourself, and maybe you’ll set and find your life’s new direction.”

“Most importantly, we want you to learn how to think,” said Farley. “What can Washburn do for you?”

After Farley’s speech, the second video in the Washburn 150th anniversary series began playing. The video was produced by KTWU, and covered university history from 1915 to 1965. After the video, Wood gave her speech about her collection of pictures from a lifetime of “the first day of school.” Slides showed a picture of her on the first day of elementary school, and an image from Monday-the first day of the fall semester.

“Those photos are about hope,” said Wood. “They’re symbols of hope for the future, for students and faculty alike.”

“You are in a perpetual state of becoming,” said Wood. “We are all in that state–of learning and evolving.”

Following Wood’s speech, a video about WU’s iRead program played, and students funneled through a tunnel of students and professors. Farley, along with Wood, Benedict, and other distinguished faculty and students, high-fived the freshman class as they passed through the tunnel.

“This was my first time speaking at convocation, and I’m really impressed with the turnout,” Benedict said. “It was intimidating in some ways, speaking to an entire room of people who care about our school… but it was rewarding to share that appreciation with others.”

To wrap up welcome week, a free barbecue dinner was served, and WU Fest took place on the union lawn. Various activities and games were sponsored by WU student organizations and Greek life.

“It was pretty awesome,” said Allyson Yockey, a sophomore nursing major. “It was a pretty good week overall. I’m a transfer student, so feeling at home is important to me. Washburn’s done a good job of that.”