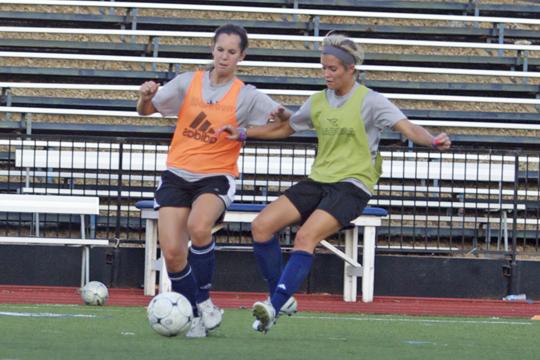 It’s the start of a new season for the Washburn Lady Blues soccer team and head coach, Tim Collins, it’s going to be a possessive one fueled with a stronger drive than last year’s season.

With a large majority of the Lady Blues roster returning this season, practiced strength and agility is a guarantee on the soccer field. Collins describes his returning seniors’ attitudes as “filled with a strong purpose.” Those senior leaders are Tia Stovall, Leah Talley and Lindsey Lambert.

Collins then goes on to describe some of his junior leaders, such as Caysie Beetley, Megan Buckley and Lara Doescher, who, according to Collins, have certainly stepped it up a notch this season.

“I originally only expected two of our freshmen to have an immeadiate impact, but I can easily say that I have been pleasantly surprised with all of them in one aspect or another,” said Collins.

Collins also who has particular hopes for a transfer from Paradise Community College in Arizona, Lara Doescher.

According to Collins, the Lady Blues have grown exponentially throughout the off season.

“We’ve grown quite a bit in three areas,” said Collins. “Commitment, everyone is committed to each other and our goals; attitude, we’re growing a greater wit (whatever it takes to win) and focus, we’re all heading in the same direction.”

Together Collins hopes to build a unity amongst his players.

After a season like the Lady Blues had last year, not taking quantum leaps is huge to the coach.

“My only expectation is that we compete from the opening whistle to the closing whistle,” said Collins.

That is exactly what he’s anticipating for the  Blue’s first soccer game against Drury this upcoming Friday, August 31st in Springfield, Mo., starting at 7:30pm.

“This is the first time we’ve played against Drury and they will be a challenge,” said Collins. “Nevertheless, we’re up for it, and I expect us to absorb some pressure, solve the problems that need to be solved and create some real problems for them over the entire course of the game.

Collins has been satisfied with his team’s performance so far this preaseason.

“I’ve been happy with our performance, our composure, and our execution,” said Collins. “But we need to continue to learn to compete even harder in practice and to continue to build out belief and trust in each other.”