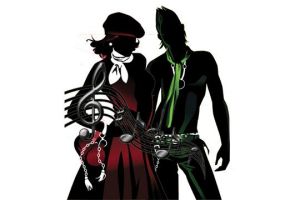 In their second collaboration this year, two local designers continue on their mission to unite Topeka through fashion and entertainment.

Terry Dudley II, of T.R.E.A.L., and Ashia Ackov, of Mismatched Misfitz, are joining forces for a runway show on Sept. 13 at the Holiday Inn Holidome at 605 S.W. Fairlawn Rd. The show will feature the work of both designers, who are the first to point out the differences between their styles.

“I would have to compare my style to Ecko and Sean John,” said Dudley. “It’s upscale but casual.”

Ackov, on the other hand, describes Mismatched Misfitz as “wild and crazy.”

The show will not only serve as exposure for Dudley and Ackov, but also as an opportunity for local models to experience the world of fashion. At a rehearsal on Monday, Ackov shared her excitement about some of the new models participating.

“We have some first-time models walking,” said Ackov. “We’re giving an opportunity to those people who normally wouldn’t be able to walk because, say, they’re five-foot-four.”

But the models and designers won’t be the only ones strutting their stuff this Thursday. The event – aptly named “When Music and Fashion Unite” – will also feature live music and entertainment provided by KC Reign and Stric-9. From Kansas City and Lawrence,  these local groups will bring their individual, contrasting styles to the event. Part of the motivation behind this mixed-media collaboration comes from the motto that inspired the acronym that can be seen on much of Dudley’s apparel: “Together Risin’ Equally And Lovin’ It.” Featuring both dancers and rap artists, KC Reign has performed at various events in and around the Kansas City area. The designers are excited to feature KC Reign and Stric-9, an alternative rock band formed in Lawrence, in the same show.

“We’ll have different genres of music and different styles of fashion, all in one,” said Dudley. “Nobody excluded, everybody included.”

The Thursday event will serve as Stric-9’s first live show, which Dudley and Ackov hope will earn the relatively young band some local exposure.

“I really want to make it a good experience for them,” said Ackov.

A strong focus on building local community – shared by Dudley and Ackov – makes this event a special one, and promises a welcoming and stimulating environment for designers, models and musical guests alike. Both designers plan to make the show a semi-annual event, and hope to see Topeka united through this showcase of individuality.

“I see it as a melting pot,” said Dudley. “We’re all coming together to provide a positive atmosphere, a way to break up the monotony of the week and a relaxing place to listen to some music and see some nice clothes.”