VIDEO: The No. 3 ranked Lady Blues look to upend the top ranked Lopers 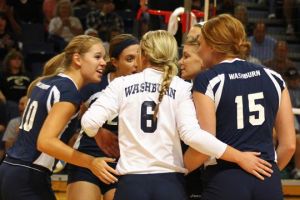 The Washburn volleyball team was not going to be stopped last week, especially at home.

The No. 5 ranked Lady Blues entered Friday’s contest against Pittsburg State University (8-4, 0-3 MIAA) with a 10-0 record and didn’t show any signs of being defeated soon. Lead by their All-American, senior middle and rightside hitter Jessica Fey, the Blues eased through the Lady Gorillas with scores of 25-19, 25-14, and 25-11.

“I thought our kids, except for one rotation in game one, I thought we played really well,” said Washburn head coach Chris Herron.

Fey lead the team with 11 kills and had only one error in 17 attempts. Washburn was strong on the attack against PSU, beating them in kills with 48 to the Gorillas 22. Sophomore sensation Marrisa Cox chipped in nine more kills while junior Abby Whitman set up Cox and the rest of her teammates all night, dishing out 29 assists. The Lady Blues continue to keep opponents out of rhythm, this time out hitting PSU .301 to .042.

“We served tough,” said Herron. “We kept them out of system.”

After their Friday win, the Lady Blues played host to conference newcomer the University of Central Oklahoma the following day. UCO played spoiler on the turf with a big upset of the then No. 9 ranked Washburn Ichabod football team the same day, but the volleyball team would not suffer the same fate. The Lady Blues swept the Bronchos with a 25-18, 25-17, 25-10 win. Washburn continues to get consistent play from everybody on the court, with different players stepping up on different nights. Against UCO, Jessica Kopp took the lead with 10 kills while Cox and Fey both added nine more kills.

“I think we just, we did what we needed to,” said Cox. “Hopefully next week we come out with a little more energy and fire and we can get wins next week too.”

Washburn easily won the kill battle again with 39 to UCO’s 29. After 12 games, Washburn’s attack percentage is .259 to their opponents .103. Washburn was able to get underclassman some playing time, something that could be key later on.

“I couldn’t be more happy for them,” said Herron. “It also helps us with our depth in case something could happen down the road.”

Washburn will have little time to celebrate. The Lady Blues, now third in the American Volleyball Coaches Association, will get back on the bus and travel to square off with three MIAA foes. If things play out right, the Blues will get their chance to upend the No. 1 ranked University of Nebraska-Kearney Lopers on UNK’s home court Saturday night.