Author Speaks To Mabee Audience about ‘Our Boys’ 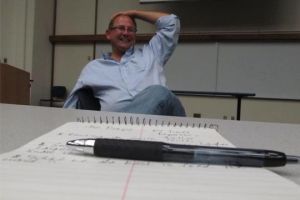 A short story quickly became a lengthy book about small-town life for one big-city reporter.

Drape, a New York Times journalist, moved his family to the small town in the exact center of the continental United States, and lived there for nine months while documenting and observing the comings and goings of people living in Smith Center (population 1,931).

Drape’s journey to Washburn began in 2007, when he was on a train headed back to New York. Upon reading a newspaper, he saw a brief about the Smith Center Redmen, who hold the national record for most points scored in the first quarter of a game (72 points in 2006.)

“I love doing stories back here,” said Drape. “I was kind of between things, so I picked up the phone to call the school and see what it was all about.”

After getting in touch with the Redmen’s coach Roger Barta, Drape’s curiosity was piqued, and he decided to write a story about the Redmen and the community of Smith Center. He arrived in November 2007, with his family in town.

“When you go do these things, you go to the center of town to the cafe,” said Drape. “That’s where you find the broad cross-section of the place.”

In the cafe, Drape found this cross-section– “police officers, old farmers, and the Lutheran ladies club”–introduced himself, and explained what he was doing there.

“That’s where the title came from, was within that first hour,” Drape said. “They weren’t talking about ‘the team,’ or ‘the Redmen’ or anything else, they just kept talking about ‘our boys.'”

After being invited to a community volleyball game, Drape met Barta. Barta would go on to win his 300th career game in November 2009. He is one of three active coaches in the state with 300 victories to his career.

“The first thing he said to me was ‘what we do here ain’t about winning or losing, it’s about raising kids,'” said Drape.

Initially, Drape wrote a much shorter story intended for page space in the New York Times. On his way back to Kansas City, he got a call from the Times. The editors wanted to run Drape’s story on the front page, above the fold with images.

“It was a really bad news day, and they were looking for a ‘bright,’ a story that won’t make people really depressed when they read it,” Drape said.

After the article was published, Drape received phone calls and emails from random strangers, talking about their small-town lives or expressing interest in the story. That’s when something clicked for Drape.

“On my way home, I called my wife and said ‘you know, there’s probably a good book down here,'” said Drape.

After getting the book proposal approved, Drape began the most difficult step–convincing his wife to quit her job and move to Kansas for the sake of the story. Drape’s convincing worked, and then him and his wife moved to small-town America.

“It was mind-blowing in a lot of ways,” said Drape. “The silence was deafening. It was just so weird not to hear things.”

Over the next nine months, Drape took note of the personal, emotional and cultural nuances of the Redmen and the community supporting them.

“I’ve done stories like this before, but this was the most pleasant experience I’ve ever had,” said Drape.

White Concert Hall was half-full of people listening to Drape’s stories about his expectations for the book versus what actually happened.

“You can never anticipate the direction which a story will turn,” said Drape.