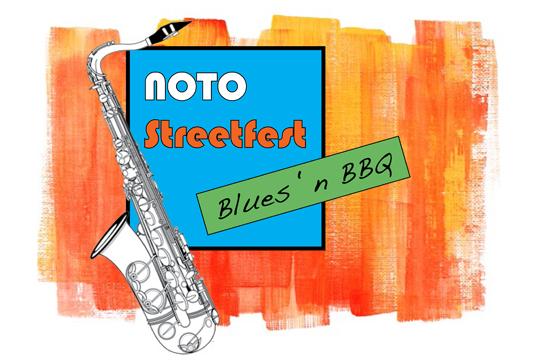 The North Topeka Arts District, NOTO, will be hosting a street festival, complete with food and music from 2 to 6 p.m., Sept. 30 at the NOTO Arts District.

Admission for the event will be $10 for adults and children ages 12 and under are free.  Lawn chairs are allowed but coolers, outside beverages and food are not.  Funds gained through this event will primarily be used to support NOTO’s core artist grants program, increase the schedule of art classes offered and enhance marketing efforts to support merchants in the district.  This event is also being held to give the community a chance to contribute to NOTO’s opportunities for arts and artists in Kansas.

This will be the second NOTO Blues & BBQ Streetfest.  Last year’s event was a product of the NOTO community, but credit is also due to Brad Jennings of Bradley’s CafÃ©.

“Although quickly put together, it drew a large crowd to North Topeka on a bright, fall day in 2011,” said Vicki Buening, a volunteer with the NOTO arts program. “We hope this year’s event will build on that foundation.”

This year’s event is a cooperative one through the NOTO merchants in the district and the NOTO project board. Buening states that Bradley’s CafÃ©, as well as Roebuck’s Jewelers have been instrumental in making this year’s event possible.

The band line-up this year was found with the help of Uncle Bo’s and the Topeka Blues Society.  The opening performance will be the Josh Vowell Band.  They are a local Topeka group that plays blues, rock and roots music.  The band was picked to represent the Topeka Blues Society in a national competition.  Following them will be the Kris Lager Band.

The KLB has its home in Omaha, Neb.  They describe themselves as “self proclaimed roots revivalists.” KLB brings an eclectic, high energy show to each and every stage they happen to land on. The musical palette from which these troubadours draw upon is strongly rooted in the blues and classic rock stylings, but has touches of funk, jam, r&b, barrel house country, spicy Latin beats, Cajun zydeco, as well as gospel music and some hip hop thanks to free stylist John Fairchild AKA Scooby Sha Bo Bo.

The headliner for the festival will be Hadden Sayers, a Texas blues band.  Sayers got its start from renowned vocalist Ruthie Foster.  Its  first release, “Hard Dollar,” came out in 2011.

Information, updates and directions for the event can be found at the NOTO Blues and BBQ Streetfest page on Facebook. The NOTO Arts District is located at 922 N. Kansas Avenue.