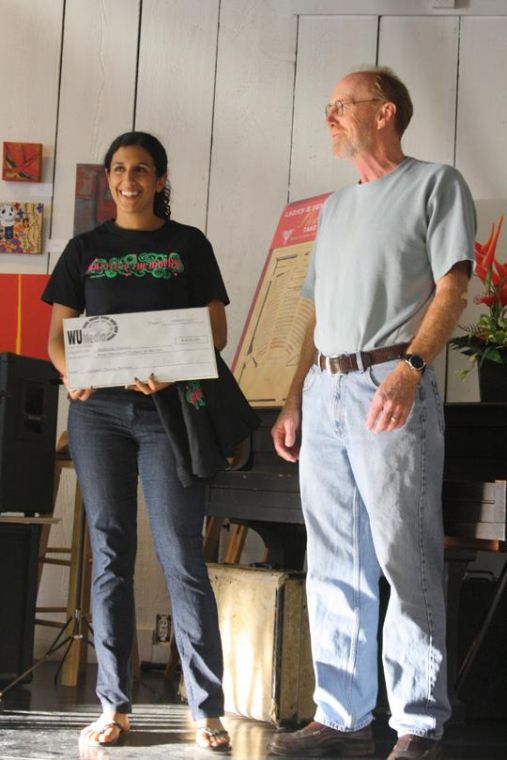 Big Money Bita Givechi and Student Media presents Doug Jones with a $400 check to go to the revival of the Jayhawk Theatre. The money will go towards upkeep, utilities and other costs associated with keeping the 86-year-old building. Each year Student Media holds a battle of the bands and donates the proceeds to the theatre.

The Jayhawk Theatre has many plans for the future and at this month’s First Friday Artwalk they became $400 closer to their goal.

The staff from Washburn Student Media donated a check to go toward the revival of the theater. The money was raised this past spring at their annual Jayhawk Theatre Revival Battle of the Bands in April. The group has also been selling their leftover T-shirts at Top City Thursdays throughout the summer.

“I’ve been with this project since the beginning and Washburn students and the Washburn Review have been one of the most tremendous psychological boosts for us,” said Kathy Duncan, operations director. “They have always been a fiscal resource for us because they have done the concert now for some time, and it is a shot in the arm when you are doing a project to hear young people come in and say they want Topeka to have this project.”

The theater, which was built in 1925 and opened in 1926, is located at 720 SW Jackson St. in the Jayhawk Towers. To get to the theatre one must first enter the Upstage Gallery where there are various displays of art from artists from around the country. This gives people a reason to come into the theater and promotes visitors to explore the theater as part of their visit, and hopefully get people interested in helping restore it.

“[The theater] started with vaudeville – we are going to have every kind of entertainment in here, from music to stage to independent films to even video conferencing for businesses,” said Doug Jones, president of the board of directors and an instructor at Washburn University. “We will have a room that can hold over 100 people for weddings and things like that. We will have events where people will come at like 3 a.m. to watch the Bolshoi ballet live as it’s really actually happening in Russia.”

With plans like these, a lot of money is needed from many places. Jones described the work that needs to be done and that includes many specialists in different areas.

“We are approaching big corporations, and we have a grant from the city that we are doing right now, and a grant from the Kansas State historical society,” said Jones. “We are out approaching people for six-figures and more than that, and name/gift opportunities and stuff like that.”

Jones said the money needed to fully renovate the theater comes to $8.7 million. This includes restoring the painting of the Goddess of Agriculture, all new up-to-date equipment and new seats. Originally the Jayhawk held 1,500 seats, but with the population’s growth in size, literally, the seats now are made bigger. The theater will have 900 seats after the work is completed.

“We are on the front edge of seeking the banks and corporations,” said Jones. “We want to have all of the latest technology.”

In the future, the Jayhawk hopes to have all types of entertainment available. When it opened in the ’20s it was one of the first buildings in Topeka that had air conditioning. Their shows were mostly Vaudeville-type until 1953 when a CinemaScope screen was installed that could project 3D movies and regular films. Jones remembers going to the Jayhawk to watch movies when he was a boy.

“I used to come here on Jackson street to get in line for 101 Dalmations, and other  Walt Disney Films, I was like seven or something like that,” said Jones. “We’d come down and watch movies.”

For more information about the Jayhawk Theatre go to their website at jayhawktheatre.com or their Facebook page. The Upstage gallery also has their own Facebook where they post which artists they are featuring and other news.