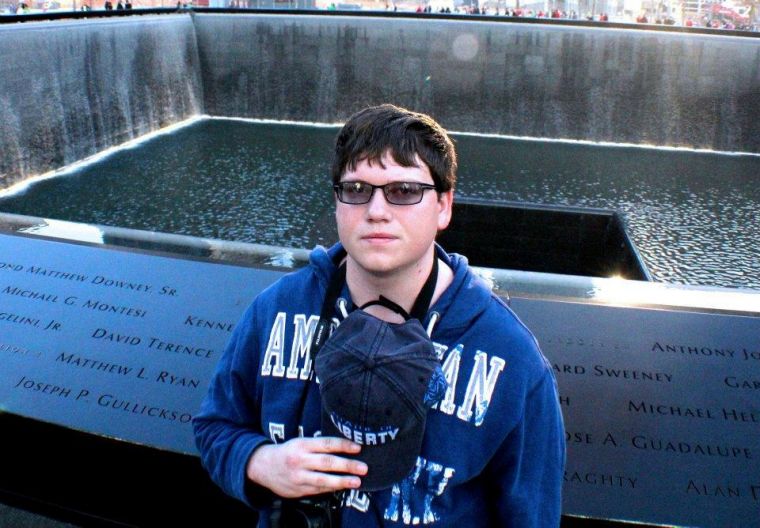 Remembering Brian Dulle stands in front of the 9/11 Memorial in New York City, respectfully putting his hat over his heart, remembering the hundreds of lives lost on that day.

I’m sure that is a question everyone who lived on that day has been asked many times in the last eleven years.  I know where I was and I will never forget it.

I was in the sixth grade and I was sitting in my science class at Eisenhower Middle School in Kansas City, Kan. The teacher came running in five minutes past the time class was supposed to start, turning on the television and explaining to us that two planes had just hit the World Trade Center towers in New York City.  I watched in horror as these terrible events unfolded.  I won’t go any further in detail because we all know how the rest of the day unfolded.

I don’t think everything settled in until later that night.  I remember doing nothing else but watching the news, trying to understand why?  Why would someone do this?  I remember sleeping each night, waking up and hoping that it was a nightmare, hoping that everything would be back to normal but as we all know that didn’t happen.  I took everything in, knowing that I would remember this day for the rest of my life.

Those days afterward…weeks…months, we held our families close, we mourned for the fire fighters and police men who died and were still risking their lives to find survivors.  Politics seemed to be out of the picture, it didn’t matter if you were Republican or Democratic, what mattered is that we were all Americans and we were damn proud of it.

This past year Washburn Student Media gave me to opportunity to go to New York City.  I was able to see the 9/11 Memorial.  I can’t describe what it felt like; I don’t think that is possible.  Of course I was beyond sad, when you see all the names, when you see the wall of firefighters rushing into the burning buildings, risking their lives to save others it also makes you proud.

Seeing the new One World Trade Center Tower (Freedom Tower) made me proud because it showed that cowards can hurt us deep but we will always come back strong.

Now all I hear is how 9/11 was a government set up and there is so much politics that come into play and I’m sick of it.  We should stand united as Americans and be proud of the country we live in.  Are we perfect?  Of course not but we need to support the heroes that are out there every day fighting for our freedom and our lives to make sure we are safe.  I’m talking about the firefighters, police officers and our military.  I’m proud to have had multiple people in my family serve our military and risk their lives to make sure we all live safe.

Today I hope we can throw away politics, theories and other crap for a day and take time to remember those who tragically lost their lives on that dark Tuesday morning and I hope that once more we can unite as a country because we should all be damn proud to be an American…I know I am.