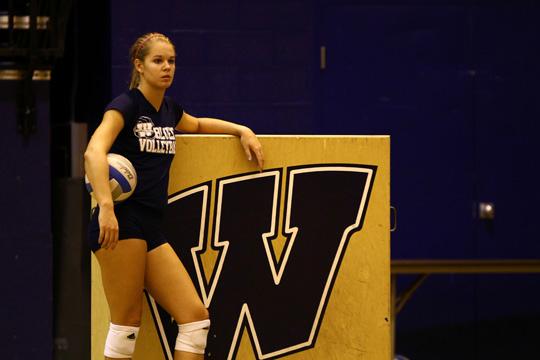 This last Tuesday, the Washburn University Lady Blues volleyball team had a strong start as they faced off against the Lady Hornets of Emporia State University and winning 3-0.

The first match, although having a slightly shaky start, Washburn ended up having a high lead against Emporia with. 25-12. The Lady Blues continued to hold Emporia State to just 12 points again in the second match with a final score of 25-12 after Sophomore middle hitter led the match with 3 kills.

Head coach, Chris Herron spoke positively about the girl’s shaky moments. “Volleyball is a game of mistakes, if you make the least amount of mistakes then you usually win.”

Noting the strong teamwork presented throughout the match, coach Herron was pleased with how the girls displayed teamwork. “I thought we played outstanding, but I would like to tell you that Emporia is a much, much better team than they were tonight,” said Herron. “They’re going to win a lot of games this year and the next time we play them; our match won’t be anything like it was tonight.”

Assistant coach, Taylor Pohlman, was also impressed with the girls display against Emporia State. “I’m really proud of them,” said Pohlman. “I think that they handled the game very well, and the crowd tonight was very intense with providing motivation for them.”

The Lady Blues will continue with their next MIAA match at Truman, Friday at 7 p.m.