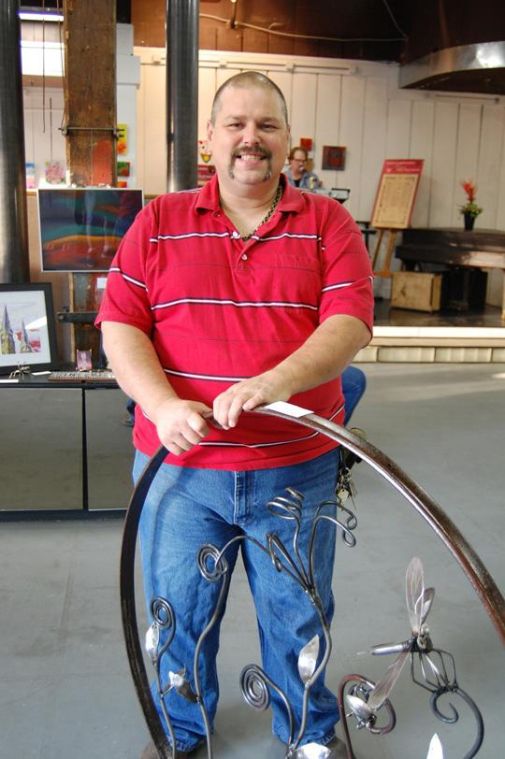 Our Rollercoaster of Life Randy Fay proudly displays his interesting art, inspired by life as a chef. Fay deems himself the "Iron Florist."

One local artist, who deems himself the Iron Florist, used his past profession to inspire artwork and create a new one. Working in restaurants in and around Topeka for many years, Randy Fay became sick of the daily grind.

“I was a chef and I worked in food service for 25 years, a chef for six, and I did all the fruit garnishes and stuff,” said Fay. “I told my wife one day, on our rollercoaster of life, I said, ‘You know, I am tired of all the restaurants I’ve been in, and I want to do something different.'”

Using his talents in carving fruit and vegetable garnishes, he applied the same technique to working with metal. At first the products weren’t very good, but with time, he got better. His work includes a teddy bear trapped inside a barbed wire tumbleweed, a spark plug that is crafted into a bug, called “Spark Bug” and other metal works. He uses old nails for bug legs and forks and spoons for shells and smaller bug legs. All of Fay’s art is made of recycled material, most he tries to get for free or next to nothing.

“I started doing this, and started with flowers, but they were a little cartoonish,” said Fay. “Everything was painted and I was going in debt. Since then I have gotten better, I think I’ve evolved.”

He has evolved so much that he’s had work on display at the Upstage Gallery for the past year and a half. Pam Renovato chose his work because it was environmentally conscious, but also because it was interesting and humorous at the same time.

“I chose [Fay] because his art is green, it’s all recyclable,” said Renovato. “What’s fun about [Fay] is sometimes you’ll try to pick out what material he used to create his art. He has a really good sense of humor, he has a bicycle with a lawnmower attached to it that he just calls it riding lawnmower.  It’s his literal titles that are so humorous, he is beginning to get a following just from his humor. It’s also very unique, detailed and intricate. Everything he creates is all recycled, it comes out of the trash.”

Fay’s art is so popular he has to replace his art all the time. His art will continue to be in the Upstage Gallery for an indefinite amount of time.

“[Fay] is long term, he is one of our core artists, we always carry [Fay’s work],” said Renovato. “He has anywhere from 10-50 [pieces], generally we carry a lot and his things sell very quickly so he has to continually supply us with his stuff.”

Fay’s work is on display around Topeka, mostly at the Upstage Gallery at 720 S.W. Jackson St. where his recent show opened at September’s First Friday Artwalk on Sept. 7.  More of his work can be found in the North Topeka Arts District at The Eclective at 900 N. Kansas Ave.