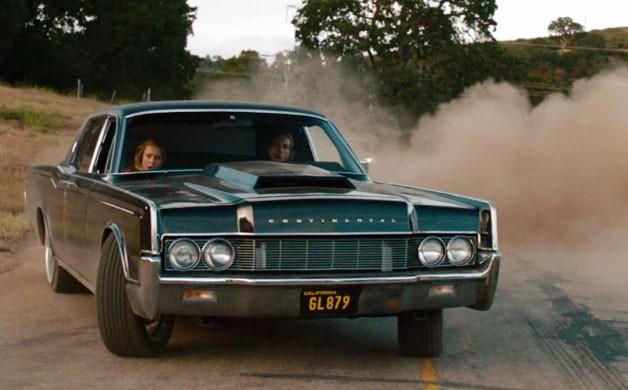 Usually when I review a comedy, at some point I mention that the film comes off as stupid but that’s what makes it funny, as for the new film “Hit and Run,” directors David Palmer and Dax Shepard change that and bring us a fun, romantic, action comedy.

The film is about a man named Charles Bronson (secretly Yul Perrkins played by Dax Shepard) who is under Witness Protection living with his sexy and smart girlfriend Annie Bean (Kristen Bell).  Bronson’s protector Deputy Marshall Randy Anderson (Tom Arnold) isn’t the brightest and will probably be the character that will make you laugh the most, especially when he is chasing after and shooting out his SUV.

When Bronson’s girlfriend, who specializes in nonviolent conflict resolution, is offered a job in Los Angeles, he decides to take her in his kick ass 1967 Lincoln Contintental , even if it means risking both of their lives to make her dream come true.  They are soon followed by Annie’s over protective ex Gil (Michael Rosenbaum) as well as Randy.  When Gil makes contact with the peopled Bronson is truly running from, his past is revealed to Annie and the stakes get higher, the cars accelerate and the story takes you off for a fun ride.

I was truly impressed with this film and how it was put together.  One problem I have with most action movies is that it seems to drag on and on but this one didn’t seem to do that and when it ended I was satisfied.  Shepard and Bell make a great team and the film does a great job keeping focus on them and their relationship as she tries to cope with his true past.