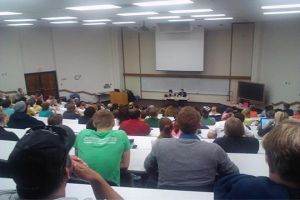 Last Tuesday in Henderson 100, a debate on the topic of same sex marriage was held.

John Corvino, a gay man, professor of philosophy at Wayne State University, Mich., and promoter of gay rights was on the pro-gay marriage side of the debate.

Corvino’s opponent was Maggie Gallagher, a newspaper columnist, writer of several books, former president and former chairman of the board of the National Organization for Marriage, an organization that opposes gay marriage, as well as domestic partnerships and civil unions.

Corvino started his argument by making a point about how gay marriage doesn’t take anything away from people who want a traditional marriage.

“Marriage licenses are not some sort of finite resources, that one we run out of them they’re gone,” said Corvino. “Giving marriage to gay people does not mean taking it away from straight people.”

Corvino continued by saying that some of the reasons that he and other homosexual individuals want gay marriage are because of the benefits a marriage provides. One of these benefits is “next of kin” which allows a partner to visit and make decisions for their significant other if they have had to be hospitalized. Corvino then clarified that the marriages he is working for are “civil marriages, not religious marriages,” meaning he’s not asking the government to force Catholic priests to marry same-sex couples. Corvino also addressed the “slippery-slope” argument, which boils down to “If we’re going to allow same sex marriage, why not polygamy, incest, bestiality?” In response, Corvino said that these are different types of marriage and should be judged on their own, calling out people who use this argument as “changing the topic.”

Gallagher’s first act when she took the stage was to ask where the attending students stood on gay marriage. This was accomplished by a show of hands. When asked who was in support of gay marriage, almost all of the hands in the room went up (Henderson 100 can seat 150 people and was almost full.) When Gallagher asked the room who was opposed to gay marriage, four hands went up. When she asked who thought it was “none of their business” approximately 10 hands went up.

“I think the place to start is to recognize that marriage is a virtually universal human social institution […] between male and female, I like to say at least one man and one woman, because quite frankly, polygamy is a fairly common variant among small tribal societies,” said Gallagher.

Gallagher continued by saying that marriage as an idea boils down to “three persistent truths”, the first of which is that humans are attracted to an act that creates new human life.

The second of these truths Gallagher proposed was “Society needs babies,” to continue to exist. Lastly, the third idea was “children need to have a father as well as a mother.

Other concerns that Gallagher voiced were that, if gay marriage became legal, businesses like foster homes and wedding planners that chose not to serve same-sex couples would be seen as bigoted, or worse be forced by the government to serve those couples. She also feared that gay marriage would become the norm.