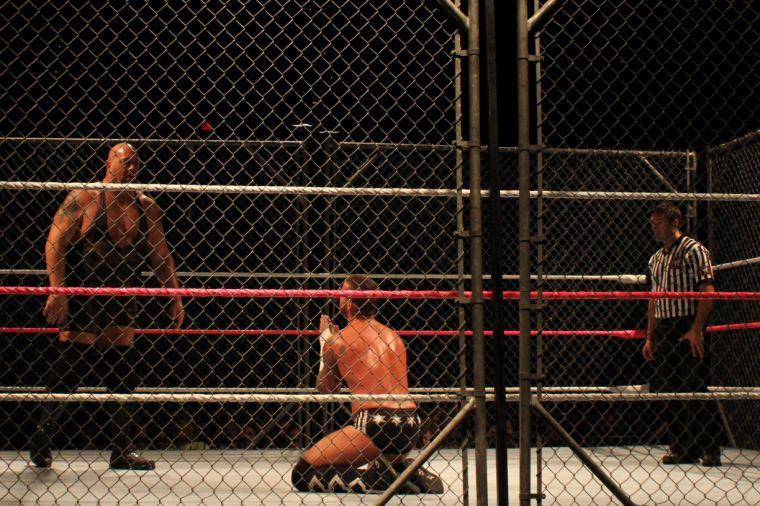 I’ve been to plenty of live theater productions, but none of them had as many slaps, hits, or hard knocks like Saturday night’s WWE Raw! event at the Kansas Expocentre.

Let me tell you something out front: I’m not a fan of wrestling. I’ve always thought it to be a little cheesy, and too melodramatic for my tastes. But, a free ticket is a free ticket, and being the young reporter I am, I wasn’t going to turn down an opportunity to see something new.

In hindsight, I’m glad I didn’t. Rule number one: never go into something with expectations. That’ll lead to all sorts of problems. CM Punk, you should’ve listened to me before jumping into that steel cage with The Big Show. You would’ve realized what a bad idea it was, and just forfeited. But, you didn’t, and after you laughably managed to pin a 7-foot 400-pound man, you got knocked out cold.

The night’s festivities began with a Tag Team Championship. The infamous Kane made an appearance, and in a hilarious turn of events, ended up “hugging it out” with his opponents and his teammate–the bearded temper-tantrum-throwing Daniel Bryan. And then he threw Bryan out of the ring, in typical Kane fashion.

Then the Diva Champions entered the ring. I took a moment to pause my thought process and watch two well-endowed women beat the crap out of each other. Review photographer Mike Goerhing has excellent pictures of this. During the diva fight, a 10-year old girl wearing a CM Punk t-shirt that was three sizes too big posed for a picture with the divas in the background.

She was so proud of that picture, and I was suddenly worried for the future of humanity.

Is that the events of our lifetime that are being recorded for future archaeologists to find? “Look at mommy! She’s so young in her huge CM Punk shirt. And look at the Divas fighting behind her! What hot babes!”

Of course, I’m being a little too harsh. I needed to understand why people enjoy wrestling. I needed to keep watching, so I did.

That’s when Brodus Clay and Damien Sandow entered the ring. Clay, a larger-than-life pimp, faced off against Sandow, the distinguished gentleman in a silk robe. Of course, Clay and his much larger mass won. Rule number two: fat equals power. I kept that in mind for the rest of the night.

Next came my favorite fight of the night: Santino Marella versus Tensat. A small Italian versus Godzilla with face tattoos. Marella’s Chaplin-like slapstick variety versus Tensat’s hulking mass. It was hilarious, and in the end, the underdog won with an impressive body-slam. Rule number three: the underdog (almost) always wins.

After that fight, I was beginning to like it. The more I watched, the more I became engrossed in it. I was starting to understand the appeal of wrestling. But I wasn’t quite convinced, so I continued watching.

Next up was a Lumberjack match featuring Zack Ryder and Antonio Cesaro. Ryder was the crowd favorite, but Cesaro won, much to the audience’s dismay. Another rule of wrestling, and one I should keep in mind for future reference: you don’t have to give the audience what they want. If they get a disappointment every now and then, they’ll stick around until they get desired results. They’ll remain with you until the underdog wins–or until The Big Show slaps CM Punk in the face with his own championship belt.

I know this is all stunt work. I know it’s live theater with slaps and hits and kicks. But I didn’t know why people liked it until I saw it live. There’s something very visceral and compelling about watching a live fight with clear characters and a usually expected outcome. It’s the classic tale of good vs. evil, just re-imagined for a different demographic. People aged eight to 80 cheered and booed along with their favorite fights. I guess everyone likes it when the “bad guy” gets slapped, no matter your age.

I think it was the performances that hooked me. Simple fighting is okay up to a point, but some of these wrestlers are damn good actors. They’re in character pretty much all the time, and they have to show pain and stress and fear while in character, while not actually getting hurt. It doesn’t look easy by any means.

That led me to this thought: what kind of double lives do these wrestlers lead? I’ve only heard a little bit about the private lives of WWE performers, but not much is said. That dichotomy is fascinating to me, and someday I’ll investigate it more.

WWE’s marketing department knows what people want, but also how to tease them with it. They know how drama is supposed to flow in order to attract and maintain a wide audience. It’s very cinematic and effective, and I can appreciate that. It might be simplistic, but for one night, they hooked me with their marketing tactics. I was engrossed in the spectacle of live wrestling.

That leads me back to my original point: expectations can get you in trouble. I’m still not a fan, but it was good fun. And if I ever get free tickets again, I’ll go, because one thing is certain: everything is better live.