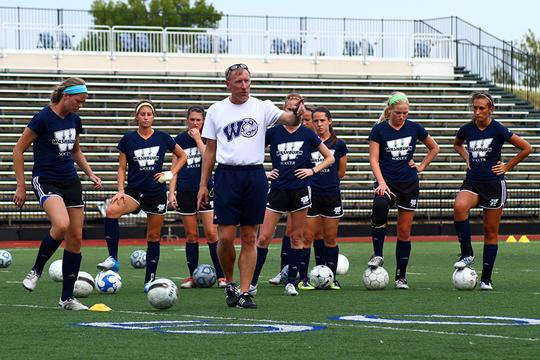 Kicking Off the Season Tim Collins, Lady Blues soccer head coach, talks to his team during a drill at practice. Collins is hoping to build off of his team’s perserverance last season.

After a dismal 2011 season which resulted in a 1-14-3 record, the Washburn Lady Blues soccer team will look to claw their way out of the bottom of the MIAA. First stop; the fall 2012 Drury Invitational. The Lady Blues will play the host team, the Drury University Lady Panthers at 7:30 p.m., Fri. Aug. 31 at Harrison Stadium in Springfield, Mo. The Blues will then face off with the Missouri S&T Lady Miners at 12 p.m., Sat. Sept. 1.

“I always have two or three things we focus on each game, depending on us, not the opponent,” said Tim Collins, Washburn head coach. “We were invited to this tourney because of our record. But we are better than our record last year and we are even better this year. We won’t be easy to beat.”

Collins enters his tenth season at Washburn University  with a win-loss-tie record of 77-74-29 at the start of this season. The Lady Blues will be led by three seniors, including the dynamic duo of Tia Stovall and Leah Talley. Despite only having three seniors on the team, the Lady Blues haven’t had troubles adapting to one another.

“I would say the unique thing about our team is the amazing chemistry everyone has on the field no matter if it’s the starters on field or the “super subs” coming in,” said Lara Doescher, a junior midfielder from Waddell, Ariz. “It really makes a difference when the talent doesn’t lack when the players on the field change.”

Washburn will have to turn some heads this year to gain any respect. The soccer team was voted to finish 12th in the MIAA, barely edging out Missouri Western who was voted to finish last. But don’t count Collins and his team out just yet. And if Doescher has any say, the Lady Blues will look to make Drury pay for inviting them.

“My goal for the Drury tournament is to be able to dominate the air in the midfield, complete accurate passes to our forwards in the final third of the field and take lots of shots on goal,” said Doescher.

Doescher, a transfer from Paradise Community College, will look to be a scoring threat for the Blues. WU only managed to come up with nine goals all of last season while surrendering 38 goals.

The Drury Invitational will be a good starting point for a team trying to get back on track. Drury finished 8-8-2 last season while Missouri S & T failed to reach .500 with a 5-9-2 record. And with a solid fan base behind them, the Blues will look to give the fans something to cheer for.

“It is important to the readership of The Review to know what the difference their presence makes,” said Collins. “Being involved with your school means supporting your teams, and we will be electric. We strive for family atmosphere that is positive and fun.”

Yager Stadium will look to hopefully host two winning teams this fall as the Lady Blues continue to mesh together.

“This is the closest team I’ve ever had. Last year left a bad taste in everyone’s mouth and the team has come in prepared to not have that happen again” said Collins.

No matter the outcome of the first two games of the 2012 season, there is no where to go but up.

“Come watch us and be a part of what we achieve!” said Collins.