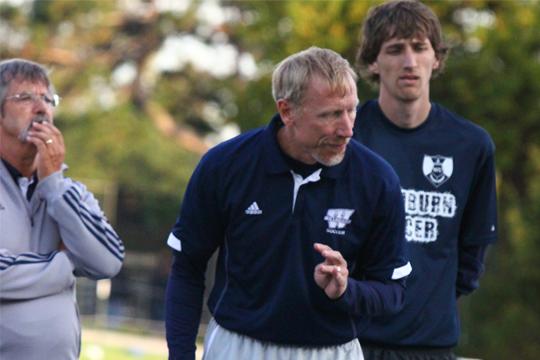 September 20 the Washburn Lady Blues soccer team had a chance to do something they couldn’t do all of last season; win two games.

Coming off of a big home win against rival Emporia State University at home, the Blues looked to notch their second win and start of conference play 2-0. The only problem; the University of Central Missouri didn’t get the memo. The Jennies rallied back from a 1-0 deficit to beat WU 3-1.

“To go up a goal and to play the first half we did is fantastic and something we can point to as a positive,” said Tim Collins, Washburn head coach.

Senior midfielder Lindsey Lambert scored at the 3:58 mark from 15 yards out on an assist by junior Caysie Beetley. The Lady Blues took a 1-0 lead into the second period and maintained it for most of the game before a meltdown in the last 15 minutes of the game. UCM’s Kayla Shain tied the game at the 74:59 mark. The Jennies tacked on two more goals soon after dousing any hope of a WU victory.

“In the second half, once they got the tying goal we kind of lost our heads a little bit,” said Collins. “The next thing you know it’s three to one.”

Was it a case of a big game hangover after defeating ESU or did Washburn just forget to finish against the Jennies? No matter the reason for the loss Collins believes his team is making strides.

“We understand that you have to compete for the whole 90 minutes and you can’t get caught up in the moment that just was,” said Collins. “A big thing is that we tend to take our moments where we have lapses at the wrong time in the game.”

Washburn got a chance to fix early season mishaps two days later against Southern Baptist University. But the Lady Blues failed to fix their late game letdowns. With a 0-0 score less than five minutes remaining in the game the Lady Bearcats’ Karla Jamison drove past the Washburn defense and scored in the 85th minute for the go ahead score. The 1-0 loss was the Blues’ fourth loss by one goal.

“It’s a game that is pretty evenly matched,” said Collins. “They had tied Emporia State the night before. Maybe we didn’t come out with all the fire we needed to have.”

After outshooting all but one of their opponents in their first five games, Washburn was outshot by the Jennies and Bearcats. UCM outshot the Lady Blues 15-4 and SBU had 17 to WU’s 15. Washburn did manage to tie SBU in shots on goal with eight, but none of those shots reached the back of the net.

“We had chances, and even after they scored with 5 minutes left we had a terrific chance and they get a fantastic save to keep the win,” said Collins.

Senior Tia Stovall was able to get a shot off at the 85:54 mark but SBU goalie Megan Link made a crucial game to seal the win. The Lady Blues (1-6-0, 1-2-0 MIAA) will need to start scoring more goals in order to being home some more W’s. The offensive minded Blues will head to Hays to face the Fort Hays State Tigers (5-3-0, 1-2-0 MIAA), who recently defeated SBU 3-0. September 30, WU will face the Lopers of the University of Nebraska-Kearney (5-3-1, 0-2-1 MIAA). With 11 games still left to play, the Lady Blues will have plenty of time to turn things around.

“Season isn’t over by a long shot,” said Collins.