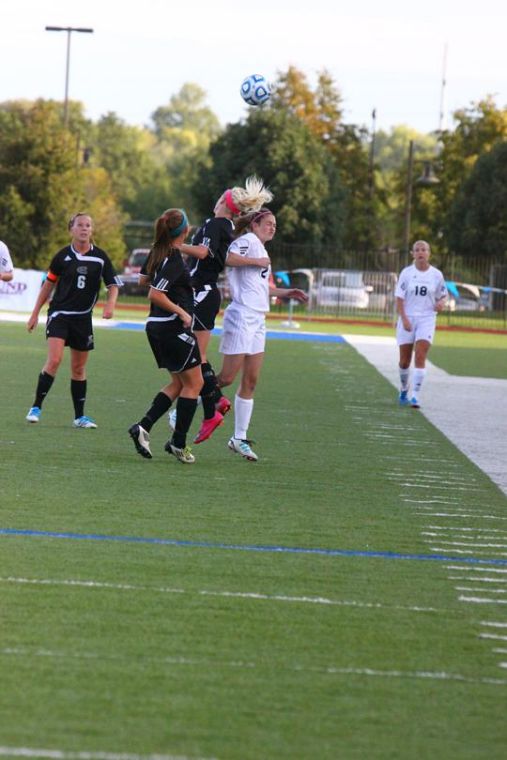 Senior outside hitter Hilary Hughes was ready for the 2012-2013 season.

The kinesiology major was first motivated to play volleyball by her father. Hughes first started playing volleyball in the 5th grade through a YMCA medal league in Wisconsin.

“My dad had a passion for the game and signed me up for my first medal league,” said Hughes. “Since that day, my parents have always been so supportive.”

She then continued on to play throughout middle school and then at Wisconsin Heights High School in Mazomaine, Wis., where she played on a traveling volleyball team called the Wisconsin Select Volleyball Club.

“My dad was also always on the sideline as he was a coach for the JV volleyball team at my high school,” said Hughes. “The love and joy I see in my parents faces when they come to watch me motivates me to keep playing the game I love.”

It was during those high school years that Hughes first sent a video of game footage and skills to Washburn University head volleyball coach, Chris Herron, who ended up attending a tournament in Wisconsin to watch Hughes play.

“Coach Herron contacted me through e-mail shortly after,” said Hughes.

Now, as a senior member of the volleyball team, Hughes, along with fellow seniors, Jessica Kopp and Jessica  Fey, are steadily falling into their leadership positions.

“Being a senior does bring about many responsibilities to not only be a leader, but to also keep practice competitive and help the younger girls get accustomed to this fast-paced game,” said Hughes. “Kopp, Fey and myself are working together to make sure we stay focused to reach our team goals and have a successful season.”

Hughes is also a personal fan of the crowds during a volleyball game,

“I’d like to give a personal shout out to the men of Sigma Phi Epsilon who have been there at all our home games cheering us on and raising havoc for our opponents,” said Hughes. “Let’s have another great season!”

Hughes looks back at her experience as a Lady  Blue volleyball player with great pride.

“It has been wonderful being a Lady Blue,” said Hughes. “I have made memories and friends that I will cherish for the rest of my life. I love my teammates more than anything and have had a blast playing with them these four years.”

The senior describes playing for Herron as nothing but an honor.

“These past four years with Coach Herron have been a pure blast and so successful thanks to his coaching,” said Hughes. “Kopp, Fey and I have all hope to make this season truly a memorable one for him.”

As the three senior girls steadily prepare for their final year together, Hughes hopes that they will continue to stay in touch.

“These past four years with these girls have been four years I will never forget about,” said Hughes. “I hope to be friends with them for the rest of my life.”

Hughes has been dangerous in the first eight games of her senior season. She leads the team in kills with 100, averaging four kills a set. The native of Black Earth, Wis., also averages 2.24 digs per set. The 2011 all-MIAA honeree looks forward to finishing her career with her fellow senior teammates.

“We have been through every win and loss, every laugh and tear and every six am workout together,” said Hughes. “This season will be the best we’ve ever had.”