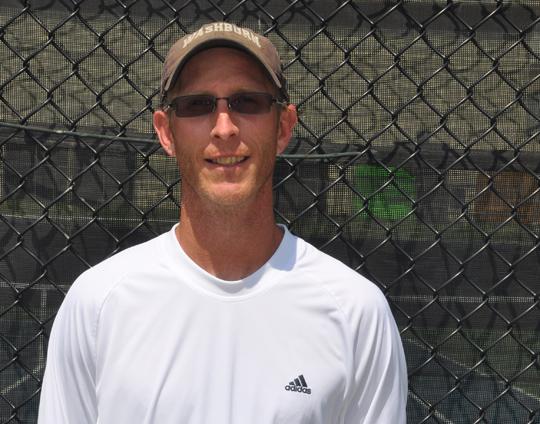 There are moments in life where sporting events are bigger than what they seem. Jackie Robinson’s first game in a Brooklyn Dodgers uniform was a step towards breaking down the wall of segregation in sports and in the United States. After a tragic campus shooting, the Virginia Tech football team took to the field in the memory of those who were gunned down. Hokie nation proudly wore school colored ribbons on their shirts along with the rest of the fans in the stadium.

For Dave Alden, Washburn’s men’s and women’s tennis coach, the Ironman triathlon was more than just a physical test.

“I decided that I wanted to do this in honor of my wife,” said Alden.

In December of 2011 Alden and his children, Alexa and Nadia, said their final goodbye to Megan Alden who courageously fought cancer. With the memory of his wife as his motivation, Alden decided to participate in the strenuous Ironman triathlon. After failing to sign up in time for an Ironman triathlon in Arizona, Alden had to resort to traveling to Louisville, Kentucky. The three-legged race begins with a 2.4 mile swim, followed by a grueling 112 mile bike ride, and to finish it off a nice little 26.2 mile stroll. To prepare for the physical endeavor, Alden began training back in April.

“I have been swimming since late April and bought my bike in June,” said Alden.

Using his spare time on Washburn’s campus Alden was able to run and maintain his training. With the help of a friend, Dave Provorse, chairman of the WU psychology department, Alden constructed a training schedule.

“I met with Dave and he said, ‘here’s your roadmap and you have about three months’,” said Alden.

Most people train for years to get in the proper shape for a triathlon, but Alden used only a few months before traveling the ten hours to Kentucky.

Despite not being in top-notch shape, there was no question he was going to finish the race.

Estimating a target time was challenging since it was only his first triathlon, but Alden decided he wanted to finish under 17 hours, a trying task. After shedding 11 pounds of fluid and 140.6 miles later, he crossed the finish line two minutes over 16 hours.

“I finished and got an IV immediately,” said Alden. “I was elated right after and then I was sore for quite a few days.”

Trying to stay motivated for 16 hours of exhausting exercise is not easy by any means, but for Alden the 16 hours was nothing. After watching his wife endure the hardship of cancer, no task seemed tough. With the support of his two children and a promise to himself and his wife, he would finish the triathlon.

“It all depends on your motivation,” said Alden. “For me it was never a question of whether I would finish.”

Nothing proves his love for his family as much as this past week did. A day after finishing the triathlon, Alden hopped in his car and drove ten hours back home to make it in time for his children’s back to school night.