Washburn students give back for holidays 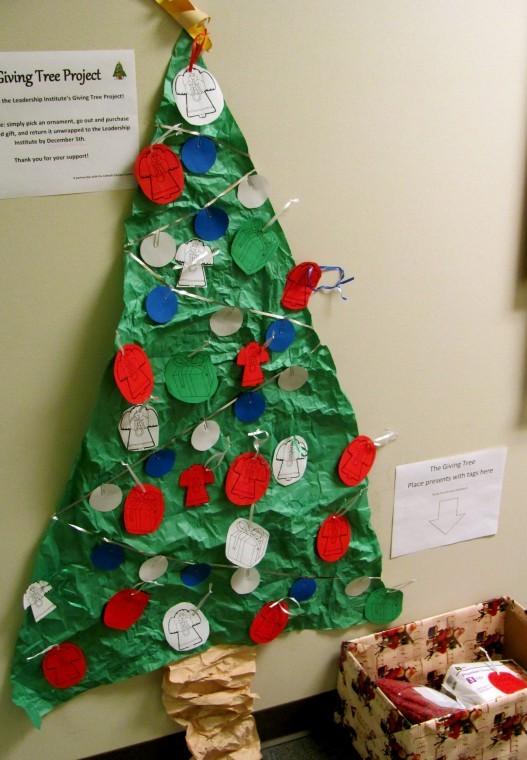 This tree sits in the Washburn University Leadership Institute office. They are one of the organizations on campus who are looking for donations as the holiday season approaches.

Need knows no season, and Washburn students have been filling Topeka’s needs year-round.

This generosity is needed most during the holidays, and Washburn’s student organizations have stepped up their efforts as the year comes to a close.

For a decade, ‘Giving Trees’ have been erected by Washburn’s Catholic Campus Center (CCC) to fulfill Christmas wishes for needy Topeka children.  Each tree ornament, tagged with a specific ‘needs list’ item, is selected by a participating staffer, student, or visitor, with a request for him or her to purchase the item.

Since its beginning, the Giving Tree project has expanded from the CCC building to multiple and prominent locations on campus, including the Student Recreation and Wellness Center, Washburn University International House, and the Washburn University Leadership Institute.

Anna Frantz, a senior English major who coordinates the Giving Tree efforts, spoke about the project.

“I think a lot of people like to get involved because it’s pretty simple,” said Frantz.  “Giving doesn’t require much time, and you don’t have to wrap the presents.  You go out and spend maybe five or 10 dollars to make a child happy.”

Frantz added that during the holiday season, warm winter clothing is most in demand, such as coats, pajamas, and shoes.  She also stated that donors recognize the need for entertainment and recreation items for children.

“The children like the fun things as well, because every kid likes receiving more than just the basic essentials, and Christmas is the one time they can actually get something for fun,” said Frantz.

Barry Feaker, Director of the Topeka Rescue Mission, appreciates how Washburn students give their time, money, and effort to help his charity.  He is also mindful that college students are busy, and that competing demands stretch their energy and time in many different directions, especially as the semester comes to a close.

“Around the holidays we have more volunteer needs than we do during other times of the year.  A group of students may decide, ‘We don’t have time to volunteer during the semester.  We’ll be home during the break, but we still want to help the effort’,” said Feaker.  “There’s a needs list on our website, and students can always help by donating food, toys, and other items from the list.”

Rick Ellis, Director of Learning In The Community (LINC), said his office focuses on community engagement and service.   LINC matches aspiring volunteers and donors with opportunities for volunteering and donation.  Ellis said a student wanting to know how to serve should consider LINC their best resource.

“If you’re looking for ways to help, come to our office in Benton 405.  We provide connections.  We have ongoing relationships with 100 different social service agencies in Topeka, and we help students by helping them find out what they want to do and by helping them tweak their choices,” said Ellis.

Ellis also said that non-holiday and year-round needs also can be coordinated through the LINC office.  Ellis mentioned academic tutor positions and programs to provide access to healthcare, such as the charitable Marian Clinic, which is partly staffed by Washburn students who are selected from a competitive pool of qualified students.

Another campus group, Washburn’s Student Government Association (WSGA), participates in other groups’ charity efforts and sponsors its own.  WSGA participates in the Giving Tree project.  For the project, WSGA’s busy office offers both foot traffic and visibility.

WSGA also leads the charity drive ‘Can Emporia’, which is a friendly competition with its athletic and academic rival Emporia State University.  This year WSGA raised over $17,000 in canned goods and donations, which will be divvyed between the Topeka Rescue Mission and Let’s Help.

Eric Benedict, WSGA’s President and a senior majoring in political science, said he is glad to continue a tradition established five years ago by his predecessors.

“It was in response to a need in Topeka that was going unfulfilled.  It’s especially meaningful given that Washburn is unique as a municipal institution,” said Benedict.  “The city gives a lot to us, so I think it’s nice to give back to the community which has helped the university become what it is.”

Sorority Zeta Tau Alpha is noted for its year-round effort to raise money for breast cancer research.  Think Pink Week and the pink ribbon are ZTA’s signature event and symbol.

Apart from its breast cancer efforts, ZTA has been active during the holiday months of the year.  In November, it participates in WSGA’s Can Emporia effort, and in December it contributes to CCC’s Giving Tree.

“I live a very fortunate life, and I have all the things I need.  It’s really important to me to give to others who may not have that.  So the sense of giving back is really what’s most important to me,” said Alanna Seymour, ZTA’s president and a senior nursing major.

Alex Haug, Delta Chi’s philanthropy chairman and a junior majoring in history, wants to expand Delta Chi’s presence at homeless shelters and food banks.  Haug tied his chapter’s desire to serve with the seasonal need and the long-stagnant American economy.

“The demand is there because it’s the holiday season, and because the weather starts getting rough this time of year.  The economy is not very good right now, and people need all the help they can get,” said Haug.

“Families get by as best as they can.  Right now, most people in need are not out of work, but they’re underemployed.  They’re either working part-time jobs, or they’re working for less than a living wage.  There are a significant number of people who are ‘working poor’ in this town,” said Ellis.

Despite grim current economic prospects, Ellis’s work continues, as does Frantz’s work with the Giving Tree Project.  Frantz believes American culture has an ethic of contribution during tough times.

“I know there’s kind of a stigma about Americans, that we can be selfish and self-centered.  But at the same time, I feel that during the Christmas season Americans do want to give a lot, and I think it’s really neat to see it in action,” said Frantz.