Organic to the max: A garden just for WU 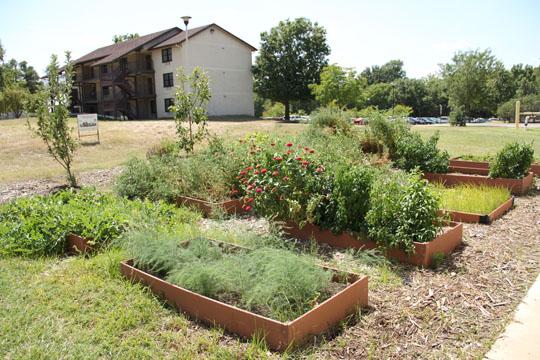 A wise man once said, “Life’s a garden, dig it.” Joe Dirt may not be a Washburn student, but he might come to mind when passing the organic garden on campus.

Washburn Ecobods organic garden got its start in 2010 as a Bonner Leader Program project started by Lacey Bisnett. Bisnett graduated in 2010 with a bachelor in psychology. After receiving funding from the Washburn Student Government Association’s community service project fund, Bisnett and 20 other Bonner students planned the plot’s location.

The garden is located behind the Learning Living Center, near Kitchen Hall dormitory. After removing the top layer of grass on the plot, they built raised beds, filled them with compost and surrounded the beds with mulch.

As one of her projects, Bisnett composted from Chartwell’s and took it to an off-campus site. Washburn’s compost and mulch now comes from Garick LLC, who also provides compost for Frito-Lay. Two of the key advisors for the organic garden project are Kellis Bayless, biology lecturer and Judy Nickelson, coordinator for Volunteers In Service To America.

The organic garden is currently in its third growing season and is open to ideas on how to expand. The garden presently has onions, asparagus, carrots, bell peppers, jalapeños, watermelons, strawberries, yellow summer squash, zucchini, potatoes, tomatoes, and various herbs such as oregano and basil. The garden’s planting season begins in early April to late May. One does not have to be a member of Ecobods to help in the garden.

A fall garden is being planned in September and will have lettuce, collard greens, turnips, carrots and radishes.  This will be the first year for the fall garden and will continue to harvest until the growing season ends.

“We like making the garden as organic as possible,” said Bayless. “No fertilizer. It can be labor intensive, such as pulling weeds.”

The produce grown on campus is harvested and taken to local food banks, such as Let’s Help.

“We are producing food for the community in need, [so] it’s a good thing,” said Bayless.

Nickelson said all the hard work pays off in the end.

“It’s a labor of love. I enjoy it,” said Nickelson.

Ecobods started in 2010 after merging with two other student organizations on campus, Treehuggers and All Greens. Bayless got involved with the organic garden itself after the forming of Ecobods. Treehuggers was formed by Bayless in 2007. All Greens was an organization formed by the Bonner Leader Program project.

In addition to the organic garden, the Ecobods have a native prairie area by the greenhouse on the south side of Stoffer Science Hall and around the sidewalk area.

Once a semester, the Ecobods have a plant sale, with plants and cuttings grown on campus. Plants are currently available for purchase. If anyone is interested in seeing which plants are available, feel free to contact Bayless to schedule an appointment.Ecobods will also have a booth set up at the Activity and Majors fair on Aug. 29.

“We need more student involvement and leadership in Ecobods to help promote eco-friendliness in the Washburn community,” said Nickelson.