Taylor starts off strong for WU 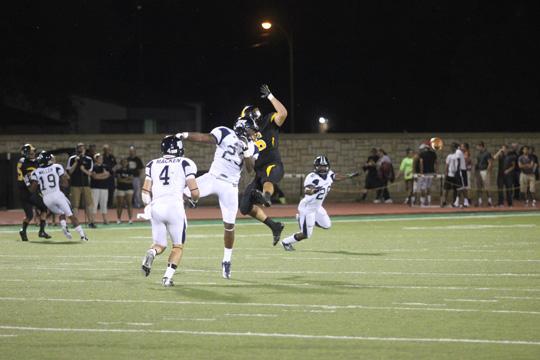 The success of a defense relies heavily upon its leadership, especially at the linebacker position.  It’s the linebacker who sets the tone and pulls a unit together so it’s no wonder why the linebacker is called the “quarterback of the defense.”

Leadership is something that the Ichabod defense has plenty of. They return eight starters from last year’s squad, but even an experienced group of individuals needs someone who can bring them together and make them a team.  Enter in middle linebacker Jahmil Taylor, a redshirt senior out of Aurora, Colo., majoring in kinesiology.  Taylor’s stats have steadily increased every year, culminating last year when he recorded 112 tackles, four sacks, a forced fumble and two interceptions.

“You gotta be physical, hit everything that touches the ball.  You gotta be fast and assignment sound,” said Taylor.

Taylor is also accompanied by fellow linebackers, juniors Bryce Atagi and Willie Williams.  Between the three of them last year, they recorded nearly 300 tackles and eight sacks.

He is especially close with Atagi with whom he has developed a special bond.

“He’s one of our leaders defensively and team wise too,” said Luke.  “He does a good job with keeping the guys going in practice if they start trying to just go through the motions.”

Taylor knows that the potential is there for his team to accomplish even more than they had a year ago when the Ichabods experienced their first playoff win.

“Win the MIAA first of all, get to the playoffs and win the national championship,” said Taylor.

Taylor knows that in order for his team to do well on the field they have to search within themselves first.

“It’s an internal motivation to want to be the best.  We’re all out there and on the same page, the same goal,” said Taylor. “It’s what you gotta do.”

Washburn’s defense will rely on Taylor to challenge them every day and demonstrate his belief of what it takes to lead.

“A true leader is someone who leads by example,” said Taylor. “When you’re feeling a little bit of doubt, you look to him and he clears up all the doubt you had.”

So far WU’s defense has been up to the task.  In the first game of the season, against the University of Nebraska-Kearney, they had three red zone stops that added up to zero points for the Lopers. In last week’s thrashing of Fort Hays, the defense forced two turnovers, and almost a third, in the first quarter alone as they held the Tigers to zero points in the first half.