RoadRunners gear up for new season 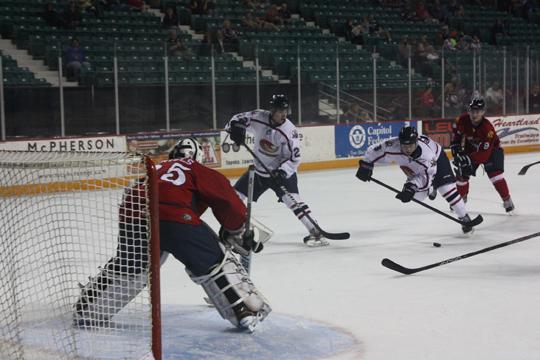 Prior to regular season play, the Topeka RoadRunners want to make sure they’re in top shape.

This weekend’s games were a step in that direction.

Playing Friday and Saturday against the North Iowa Bulls of the North American 3 Hockey League, Topeka shut out its opponent, winning 8-0 on Friday and 5-0 on Saturday.

In Saturday’s contest, Topeka jumped on top at 3:19 of the second period, as forward James Ring slipped a shot into the back of the net. The lead increased to 2-0 at 13:13 on a goal from forward Josh Haverstrom. Defenseman Luke Veitch finished off second period scoring at 13:45.

Scott Langer, Topeka head coach, said the two exhibition contests helped assess where his team is after only three practices before Friday.

“In this past, we’ve always had way more practices before we have exhibitions,” said Langer. “We kind of reversed it this year, which is going to give us the ability to make corrections real quick.”

Ring scored another goal in the third period, as well as forward Mike Chen, to round off scoring for the RoadRunners.

In Friday’s contest, the scoring started considerably quicker. Returning forward Kyle Sharkey scored a goal less than two minutes into the game to give Topeka the 1-0 lead. They wouldn’t look back from there, as forward Collin Montgomery slipped a shot into the back of the net at 15:53 of the first period.

The second period included four goals, including another goal from Sharkey, as Topeka increased its lead to 6-0.

“We had some butterflies in the first period but the second and third periods were great,” said Sharkey. “We started to pick it up and just went to work.”

The scoring finished off in the third period with goals from forward Drew Kariofiles and defenseman Trace Strahle.

With vastly different lineups on the ice on Friday and Saturday in order to give all of his players due playing time, Langer stressed that no one is safe to make the team come regular season.

“It’s a tryout for every one of these guys,” said Langer.

The preseason continues as Topeka now travels to Aberdeen, S.D. to face the Aberdeen Wings on Sept. 7-8. The regular season begins Sept. 12 in Blaine, Minn. at the NAHL Showcase Tournament.