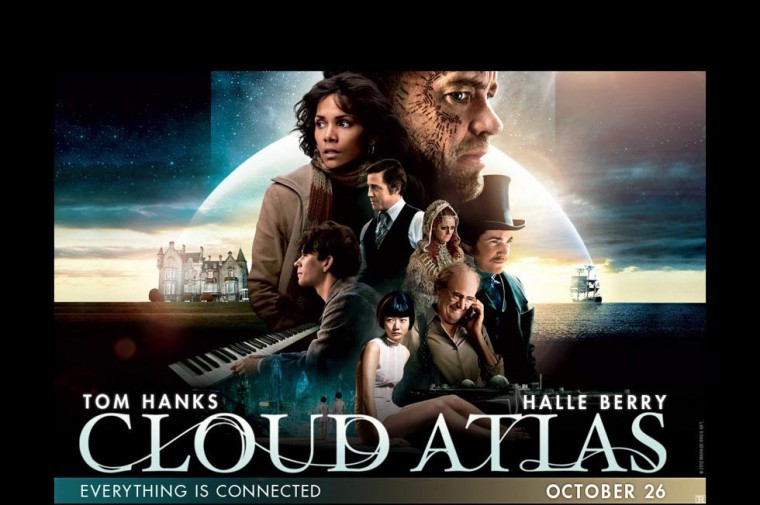 That’s the buzz word surrounding what is now my favorite film this season, and perhaps all year.

“Cloud Atlas” is composed of six separate story arcs, all interconnected by a continuous theme, spanning 500 years with the actors portraying several different characters throughout. The six main actors within the film all get their limelight, but it’s the ever-changing state of their appearance which is most obvious–and most impressive. Tom Hanks, Halle Berry, Jim Broadbent, Jim Sturgess, Doona Bae and Hugo Weaving are the biggest players within the worlds of “Cloud Atlas.”

Hugh Grant also stars in what might be considered the scariest role he’s ever performed. I mean, c’mon, Hugh Grant just isn’t what comes to mind when filmmakers need a large, imposing, heavily made-up native warrior. But Grant pulls it off in the most surprising way imaginable, and I am in no way providing a spoiler by saying that.

Word of caution: I will use the word “impressive” quite a bit in this article. The most impressive part of this film is the cohesiveness of the stories. Three directors are credited with bringing this monumental film to light. The Wachowski siblings (Lana and Andy of “The Matrix” series), and German director Tom Tykwer adapted the film from a 2004 novel of the same name, tackling the stories as separate short films, and then splicing them together into the biggest picture of all.

Speaking of the “biggest picture of all,” this film was funded by independent sources, including the German government. With a budget of $102 million, it’s one of the most expensive independent films of all time.

And it shows. Of course the Wachowskis are no strangers to excellent digital imagery, but “Cloud Atlas” is without a doubt beautiful, polarizing, and sometimes graphic. It’s well-deserved of its “R” rating, but it’s not a tasteless rating. It’s a film with realistic details, right down to sounds and textures, but with magical ideas and intense visuals. It relies on the pictures to hook you from the very beginning, with some overlaid voiced-over dialogue and a small sampling of each individual story. After that, the stories remained separated in content and even genre–jumping from drama to dark comedy to action/adventure.

The way it sneaks up on you is subtle, like a silent black cat, ready to pounce and dig its claws into your spine. And when it does, it’s certainly effective; I was riveted to my theater seat for the entire two hours and 45 minutes of run-time.

This idea of continual connections involving basic concepts of life and living is the recurring theme I mentioned earlier. If this sounds like a difficult subject to film, that’s because it is. “Unfilmable” has been used to describe this story, yet it’s out in theaters now, and critics are divided. Some love it, some hate it, but there’s no middle ground. I like it when a film does that.

Now, “Cloud Atlas” doesn’t come controversy-free. In one of the stories, a few of the actors are portraying Asian characters. The actors are white, so they were made to appear Asian through makeup, prosthetics, and computer graphics, with a heavy focus on the shape of their eyes. It’s pretty obvious, and it doesn’t mesh with the high quality of the rest of the film. It’s also not the best choice as a director if you’re wanting to stay politically correct and remain artistically detailed.

However, do not discount this film solely because of this plot device. “Cloud Atlas” has an intrinsic value worth far more than anything race or political correctness can affect. Don’t let negative critiques fool you. To quote my best friend Tyler, “if you’re looking for something to hate, you’re going to find it.”

This film is about people and the interconnectedness of their lives. Deja vu, intrinsic memories, small ripples of change spanning centuries–in reality, it has no clear beginning or end. It just continues forever, and with “Cloud Atlas,” we’re sampling a small fictional piece of humanity’s puzzle. Thankfully it’s an extremely high-quality piece of the puzzle.

I have a friend who’s studying film at the University of Southern California right now. He described “Cloud Atlas” to me like this: “It’s a movie in the same sense that a Lamborghini is a car.”

I’m going to take that description in a slightly different direction. “Cloud Atlas” is to cinema what the Bugatti Veyron is to cars. For those unfamiliar with the Veyron, it’s a $1.7 million German machine with a 16-cylinder engine, capable of mind-boggling numbers. It only takes two seconds to reach 60 miles per hour, and it tops out at 253 miles per hour… possibly more, if you dare.

Bugatti Veyron, meet “Cloud Atlas.” It’s much like you: dramatic, beautiful, scary at times, exciting at others, and very ambitious. And most importantly, “Cloud Atlas” doesn’t cost a million dollars. Just $9 will transport you through time and space, telling the story of how we’re all connected, whether we know it or not.