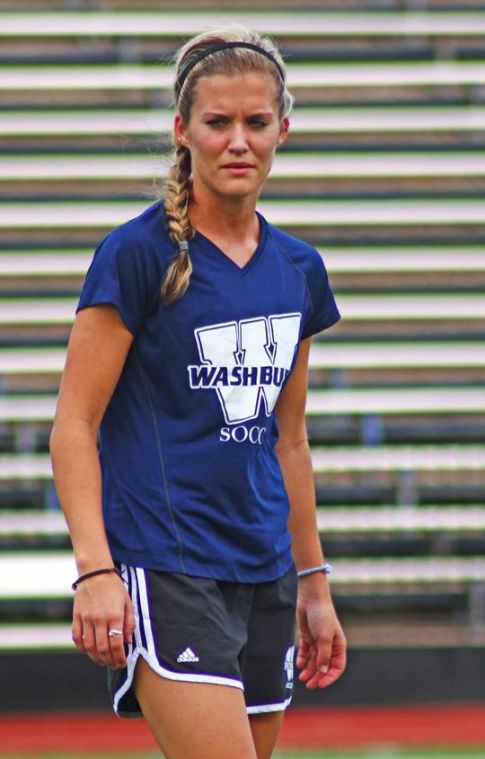 Having played soccer her entire life, Leah Talley, senior forward and biology major, hasn’t come to terms yet that this is her last season as a Washburn Lady Blue.

“It’s crazy to think that this is my last year of competitive soccer,” said Talley.

Talley first started playing soccer when she was just six years old for the Wichita Wings, her grade school club team. She then moved on to play for the Cholita Strikers and then against a more competitive league in Maize High School.

“My Cholita Strikers coach and high school coach, Jay Holmes, told me that I should pick up soccer,” said Talley. “So I tried it, and I fell in love with the sport. I’ve been playing ever since.”

“Coach Collins had sent me a camp brochure to my house when I was a sophomore in high school,” said Talley.

Talley committed to Washburn in December of her senior year of high school.

Collins says that Talley’s growth as a player began with her athleticism.

“She has worked hard to increase her abilities in lateral movement, strength and flexibility,” said Collins.

On the field, Talley’s technical ability of play has been her biggest area of growth according to Collins.

“Her vision while she plays and her ability to read the game have all improved tremendously over the years,” said Collins.

According to Talley, the Lady Blues soccer team is ready for their first official season game on Aug. 31 against Drury in Springfield, Mo.

“We have a lot to prove this year, and I feel that everyone’s in the right mindset to play. I’m really excited to see how it turns out,” said Talley.

Being a part of the Washburn Lady Blue’s soccer team is an experience Talley will miss dearly.

“It has been such a great experience and has really helped me grow as both a player and a person,” said Talley. “It has added so many great memories to my life, through rough time and exciting times! I am so thankful for it all.”

Talley’s coach of four years, Collins, is proud of the player she has become.

“Leah came in this year with a purpose. She knows it’s her last year in the game at a high level and wants it to be memorable,” said Collins. “She’s taken the time during the summer to go above and beyond the call of duty and is ready for this season, as both a player and a strong leader.”

Talley is a leader that knows just how valuable her experience as being a Lady Blue has been.

“It feels like these four years have flown by with these girls, but I have made some of the best friendships I will ever have with them. We went through all the good and the bad times together,” said Talley. “Tim is a great person who has always focused on more than just soccer with his players. He cares about us and our futures.”

Talley’s advice for her freshman teammates this season is a simple one.

“Don’t take any moment for granted because before you know it will be over,” said Talley.