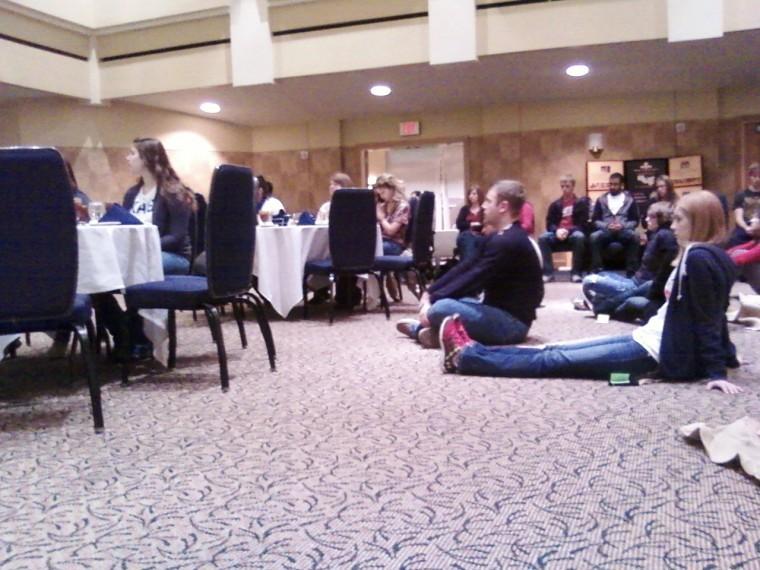 Audience members sit last week and listen to a presentation during the Oxfam Hunger Banquet at Washburn. The goal of the event was to introduce individuals to poverty and social class stereotypes.

The disparity was contrasting.

A dinner last Thursday in the Memorial Union was advertised as a banquet, but it turned out to be a feast for a few and a hunger salve for others. The event was the annual Hunger Banquet hosted by the Oxfam America Club of Washburn.

People entering the Washburn Room drew their seating at random.  Half of the audience sat on burlap mats laid across the floor.  They were allowed a serving of bland rice, no second helpings and no utensils.

Of the remaining individuals, 85 percent had simple chairs but no tables.  They were allowed two servings of an edible meal consisting of rice and beans.  They were given utensils.

A final elite 15 percent were segregated from the rest of the room and seated at cloth-covered roundtables.  These diners enjoyed a four-course meal comprising salad, bread rolls, a main entrée, and cheesecake for dessert.    But even among these elite diners, several seats went empty, representing at once the abundance and the wastage of food in the first world.

As part of its larger mission to eradicate poverty, Oxfam combats the causes of famine.  Washburn’s chapter educates people about food and famine issues, and it encourages people to contribute with gifts of time and money.

Angelique Flinn, a senior majoring in biology and human services, organized the Hunger Banquet.  She believes a sensory experience is an important way of getting the message across.

“The Hunger Banquet is a very visual representation of the world and of the different income levels,” said Flinn.  ” I think having that visual aspect to it and being able to see that 50 percent of the people here in this room would be considered to be living in poverty really opens people’s eyes.”

Three years ago, this poverty was evident in Haiti, where a catastrophic earthquake killed 300,000 people and made another one million people homeless.  Oxfam International committed to the rebuilding efforts in Haiti.  Oxfam had a visible and impactful presence, as it provided shelter, clean water, and sanitation.  Oxfam also trained farmers in new skills such as beekeeping that would improve their earning power to help send their children to school.

Washburn’s Oxfam America Club had a visible presence with this year’s banquet.  Wyatt Robinett, a sophomore majoring in biology, co-presented opening remarks with Flinn.  In his portion, Robinett gave acknowledgement and praise to the people attending the banquet.

Robinett cited that despite the vast wealth in the United States, one in every five American children lives below the poverty line.

“Everyone on Earth has the same basic needs.  It’s the circumstances into which we were born that are different.  Some of us are born into relative prosperity while millions, through no choice of their own, are born into poverty,” said Robinett.

Addressing the elite 15 percent directly, she told them, “You are fortunate enough to afford a nutritious daily diet.  It is a given that your children will attend school.  And you probably own at least one car and two televisions.  You have the access to virtually everything you need, and you have the security to enjoy it.”

The focus then shifted to the middle one-third who live with uncertainty and instability.

“You live on the edge,” said Robinett.  “It would take only one drought, failed harvest, or serious illness to throw you into poverty.  Your job pays a paltry amount.  It allows you just electricity and a few years of schooling for your children, especially if they are boys.”

People seated on the floor, representing the world’s majority, were told that their entire lives were about survival.

“You earn $2.70 a day.  Every day is a struggle to meet your family’s basic needs,” said Flinn. “Finding food and water can consume your entire day.  It’s quite likely you don’t get your minimum number of calories your hard-working life requires.”

Mark DeGroff, communications director for the Topeka Rescue Mission, spoke for a few minutes at the invitation of the Oxfam America Club of Washburn.  He described how the depressed economy has plunged many citizens, formerly in the middle class, into the lower class.

The banquet took place at dinnertime, and despite the food’s blandness and lack of variety, the portions were generous enough not to leave Washburn students hungry.  But it was understood that in the real world this was not the case.

This point resonated with Rizki Aljupri, a senior majoring in finance and accounting.

“There are still many people out there who live in poverty and hunger.  And I think we should be aware of it.  That’s the first step,” said Aljupri.  “Especially coming from Indonesia, a developing country, I’ve seen it and I’m aware of it.  So while this happens in the United States, it’s even more common back home.”

Flinn underscored the reality that poverty has no borders.  She encouraged people to think about the problem not just locally but also globally.