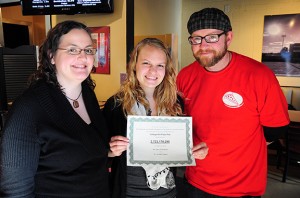 The number is mind-boggling.

Students in MA 390, the Advanced Problem-Solving Techniques class, were given a simple task by their course professor, Gaspar Porta. Porta challenged them to calculate the amount of possible pizza combinations–toppings, sauce, everything–and when they came up with the answer, they would present the owner of College Hill Pizza Pub with a certificate of their findings.

The number they finally settled on had to be limited. According to Stacy Rottinghaus, the senior mathematics major who made the calculations, the amount of potential toppings and sauce combinations is infinite.

The certificate, along with the calculations made by Rottinghaus and a menu the students used to set up their equation, will hang on the wall in the Pizza Pub as a reminder to customers that Washburn and College Hill are indeed close.

“Topeka needs to do more stuff focused around the university,” said Duncan. “Manhattan has Aggieville, Lawrence has Massachusetts Street, where’s our area like that? It makes no sense to have a community not thriving around Washburn.”

The Advanced Problem-Solving class is a mathematics lab designed to give students a chance to apply the techniques they have learned in previous math classes, and to think in a constant problem-solving setting.

“This is the first semester the class has been offered, but it’s been very well received,” said Porta.

Students in the class take no exams, finals or homework. The pass/fail class is three hours long and only counts for one credit hour, but students can take it repeatedly up to three times, and it will be offered again in the upcoming spring semester.

“This exposes students to a problem-solving culture,” said Porta. “Instead of a ‘get the right answer’ kind of class, it’s more of a ‘what can you contribute’ kind of class. It builds teamwork, and inspires them to be problem-solvers outside of school.”

Those collegiate problem solvers enjoyed half-price pizzas and free fountain drinks at the Pizza Pub on Tuesday, Dec. 4. Porta partook in a specially built pizza, designed by the author of this article. A slightly spicy chipotle pesto comprised the base, followed by chorizo (a specialty meat from Spain), red and green peppers, mushrooms, tomatoes, green olives, and Pizza Pub’s special five-cheese blend.