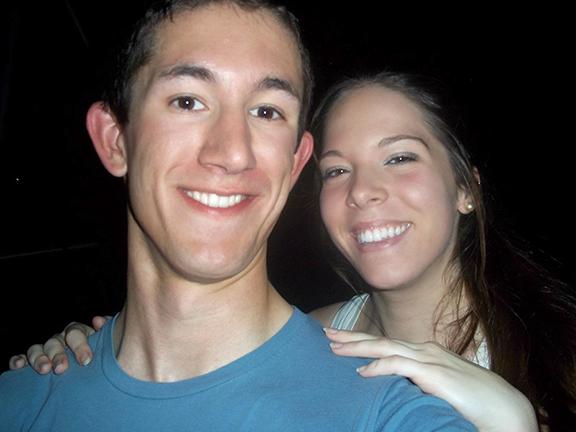 Leigh Camper is okay with not having a family.

The junior philosophy major has lived most of her life alone, under the roof of an extremely abusive parent and without any supervision or help. Throughout high school Camper lived with friends, and moved into her first apartment at age 15. Since then, she’s been independent and, in the strongest sense of the word, alone.

“I’ve done a lot of thinking, and I’m okay with not having a family,” said Camper. “Even if I got a perfect family now, it still hurts to know that for 21 years, I didn’t have that.”

On Saturday, Dec. 1, Camper experienced a “powerful” family moment when she met her estranged father for the first time in 13 years. Camper, along with her boyfriend, junior mass media major Andrew Escandon, traveled to Webb City, Mo., to meet another branch of the family tree that Camper had never previously had access to, or was interested in.

“I was terrified to go,” said Camper. “I felt like that whole side of the family has never wanted anything to do with me, and suddenly they do. I don’t know how to act about that.”

A three-hour drive from Topeka, Webb City–a town of about 11,000 people, located in the Joplin Metropolitan Statistical Area–provided an interesting setting for the Camper family reunion.

“We met [Leigh’s] dad in a bar in the woods,” said Escandon. “This was a stereotypical country bar. There were six motionless men inside; the only thing that was moving was cigarette smoke.”

In this article, Leigh’s father will be referred to as “Old Man Camper.” Upon seeing him, Escandon noticed a clear family resemblance between Leigh and her father.

“I have his cheekbones and stubbornness,” said Camper.

After a ten-minute silence, the ice finally broke. Drinks flowed and a game of pool served as an introduction. Old Man Camper’s competition-winning billiard skills left a distinct impression on Escandon.

“I’m not very good at pool at all,” said Escandon. “Old Man Camper’s the ultimate hustler. I was intimidated and impressed.”

Stories of Old Man Camper’s past exploits entertained and added to the unique aura which filled the room. With a voice described as a combination of Morgan Freeman and Jack Nicholson’s, it commanded Escandon and Camper’s attention. Pair that with an intense gaze from bright sky blue eyes, and a clear image of a man is carved from those stories.

“You can’t quote his essence,” said Escandon. “You can only describe the way he speaks, not what he says. He is pure man. He invented YOLO.”

The image that follows is one of an “Eastwood-like gunslinger,” according to Escandon. However, there’s a reason for the austerity. Old Man Camper is dying of lung cancer. With only 25 percent of his left lung remaining, he’s been scheduled to die many times over, and at this point, doctors give him “days” to live.

“Her brother said that it’s more important now, more than ever, that Leigh and her father try and connect on some level. I agree with that,” said Escandon.

Before taking the trip, Camper was skeptical of the whole situation, and pessimistic about going.

Escandon added that, of all people, Leigh “deserved some family fun.”

“Despite your past, you never get second chances like this,” said Escandon. “You won’t know until you try. There’s merit in that.”

At first, not much was said between Camper and her father. The conversation was at first about seeing and understanding and catching up on time lost. After a lengthy car ride and an in-depth conversation, the tone changed to one of regret from Old Man Camper.

“He told me he was sorry, that I was beautiful and that he wants to see me again,” said Camper. “He said he’s been waiting for this moment for so long.”

Thirteen years of separation boiled down to a tender moment. Old Man Camper embraced Leigh tightly, told her he loved her and shed some tears.

“It was a powerful connection between a father and his daughter,” said Escandon. “Real life happened in front of me. It made my life worth it.”

The full reality of the situation still had not sunk in for Camper, who was quiet upon returning from the trip. The shock of meeting a member of her family who showed care and compassion to her was, for lack of a better word, weird.

“Everyone was tearing up except me, which is backwards because I cry about everything,” said Camper. “It’ll sink in when I’m alone. I’m just so confused about it.”

Camper’s image of her father was shattered and rebuilt in one weekend. She had originally been led to believe that Old Man Camper didn’t want anything to do with her, but Escandon provided details which proved that image false.

“Camper Sr. had a box full of letters that had been ‘returned to sender,'” said Escandon. “That’s proof enough for me at least that he made an attempt to contact her throughout her life, but something always came in between him and Leigh. He’s not perfect by any means, but at least he’s putting forth an effort now.”

The stories that existed since then portrayed Old Man Camper as “evil,” unfit to care for a child. Escandon saw something else.

“I saw a stone statue cry,” said Escandon. “I saw a man being sincere during a vulnerable moment.”

Whatever she makes of it is to be determined. Camper will return to Webb City for another visit over winter break, taking baby steps to get to know her father.

“There is so much to be learned here,” said Escandon. “I appreciate what I have more because of it.”