An Unexpected Hit: The Hobbit surprises in 3D 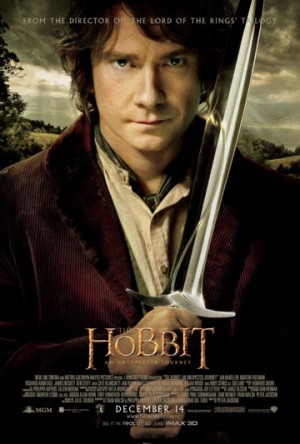 The other night I went to see The Hobbit: An Unexpected Journey in 3D and was pretty impressed. The effects were better than the few movies I have seen in 3D, before. I feel they added to the presentation and would be lacking if I had seen the movie in 2D.

The story starts off just like the book, with the much-loved hobbit Bilbo Baggins, played by Martin Freeman, puffing on his pipe outside of his hobbit-hole one morning. Along comes Gandalf, played by Ian McKellan, who wants to invite the hobbit on an adventure – of course, Bilbo is not interested. Gandalf isn’t easily gotten rid of and one thing leads to another and the 13 dwarves, including the legendary dwarf-hero Thorin Oakenwood, played by Richard Armitage, soon show up at Bilbo’s hobbit-hole ready to plan their adventure to recapture their mountain of gold from the dragon Smaug.

The movie proceeds much like the book. Only a few minor details are different but they don’t change the story line that much. The effects and scenery are much like that of the Lord of the Rings series and Bilbo and his crew come across the fairies, just like in The Hobbit’s sequels. The involvement of the fairies is a little different between movie and book, but I wasn’t bothered by it, although I realize some may be.

After getting tangled up with some trolls and barely escaping with Gandalf’s help, the dwarves and Bilbo continue to encounter many creatures and side-quests along their way. One of the creatures is, of course, Gollum. Bilbo finds the magic ring on the ground after running from a bunch of goblins and getting separated from his troupe. He then meets Gollum and they have their riddle-battle. The details are a little different than in the book but the main idea is the same and Bilbo is led out of the goblin-tunnels to the dwarves.

The movie adds an extra bit of drama to the story by adding an evil orc named Azog, chief of the goblins of Moria, played by Manu Bennett, who wants Thorin’s head because of a past battle with Thorin’s father and grandfather. Azog is not in the book except when briefly mentioned by Gandalf – Azog was responsible for killing Thror, Thorin’s father in a war long ago, and this detail is kept for the movie, just embellished a bit.

Thorin actually thinks Azog is already dead but when the goblin king calls on him to let him know the he has Thorin is in his possession, Thorin realizes Azog is still alive and out to get him. The book doesn’t have any of that, but as I said before, the main idea of the whole thing is the same. After the dwarves flee the mountain and get away from the goblins, they come upon Azog and his evil minions, which include huge wolves and more orcs. This is where the book and the movie become the same again and after this battle is when the movie will end, to be continued in the second half.

Personally I am looking forward to the second half of this movie. I do like that they are making it longer so they can really tell the entire story so I don’t mind the wait for the second half. My only complaint is that the tickets were $13.50 each which seemed incredibly steep to me – although I was very happy with the three-dimensional effects. I give this movie 4 out of 5 top hats, it’s missing one because I felt like it was just too long and they could have cut some of it to make it a little shorter – oh, and the ticket price.