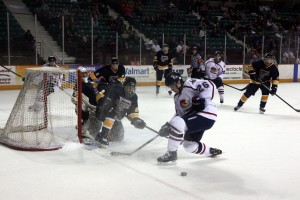 Topeka, despite 31 shots, falls 2-1 to Springfield

Friday was another tough night for the Topeka RoadRunners.

Having the momentum much of the contest, Topeka (19-8-5) turned the puck over at a costly time in the second period, helping propel the Springfield Jr. Blues to a 2-1 victory at Landon Arena.

Topeka forward Brandon Broissert tied the game at one at 14:35 of the second period, but forward Ryan Atkinson capitalized on a turnover at 14:58, which proved to be the final goal of the game.

“We just have some lapses, and it always seems to end up in the back of the net every time,” said Kevin Patterson, Topeka defenseman. “It’s just a matter of working through those things. These are lessons that we have to learn now. We’d rather learn them now than Game 4 in the South Divisional championship.”

Springfield took the lead at 6:45 of the second period when forward Mitch Rogge fired a shot past goaltender Mackenzie Sawyer. Sawyer gave up two goals on only 14 shots.

Topeka coach Scott Langer said his team has to learn how to capitalize on scoring chances before it will win games.

“We’re not scoring enough goals, and we’re just going to have to continue working on that area,” said Langer.