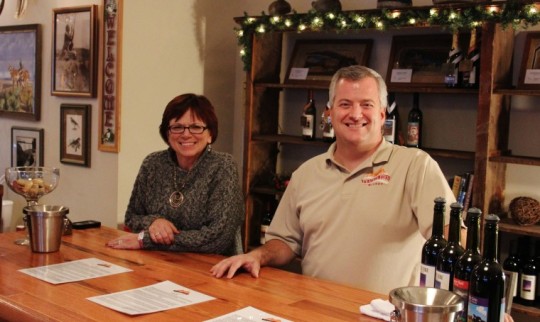 After Cpl. David Gogian and officer Jeff Atherly were killed while responding to a call outside the Dillons at 1400 SW Huntoon Sunday night, the Topeka community began to recognize the price it pays for protection.

The incident gained widespread attention, and citizens in the area responded to the call to support law enforcement. Local Topeka businesses are accepting donations for the families of the fallen officers. Some are donating a portion of their proceeds to the families and the Topeka Police Department.

About half an hour west of the city, a small town in the greater Topeka area has its entire downtown pitching in for the cause.

In Paxico, Kansas, Bob DesRuisseaux owns Prairie Fire Winery and decided he needed to help the families during the holiday season. He immediately contacted Jami McCabe, who owns the winery’s adjacent art gallery, Prairie Ghost, Too, and the two contacted every business in the area.

DesRuisseaux came up with the idea for Paxico Shop for a Cause as he and his wife, Julie, were watching the events unfold on the local news.

“Julie and I were sitting there and I was thinking, “What can we do?” And we decided that, we have this vehicle available to us,” DesRuisseaux said of the winery he began in 2005. By afternoon the next day, DesRuisseaux and McCabe had each of the local businesses helping out, and promoted the cause via social media.

From Friday until Christmas eve, these twelve businesses in the heart of Paxico will be donating a portion of their sales or taking donations for the families of Cpl. Gogian and officer Atherly.

It’s the kind of thing that, in the eyes of DesRuisseaux, speaks to the good-naturedness of the town.

“It’s a small town and if you need anything, you can just walk across and ask your neighbor, ” he said. “I think it’s kind of that community-mindedness that everybody helps each other.”

Some of the other contributors include The Brown Rabbit Studio, Stockgrowers’ State Bank, Main Street Antiques, and the original Prairie Ghost Gallery across the street from Prairie Fire Winery.

Looking down Main Street in the town of two hundred, you can see most of these businesses. And the citizens of Paxico are known for their willingness to give back to the community. In McCabe’s Prairie Ghost, Too gallery, colored stickers dot many of the works, each color designating a cause that a portion of the art’s sale will go toward.

The town organizes various events during which it raises money for charitable organizations.

“October was Pink Out Paxico. Everybody participated and decorated,” said McCabe. “The businesses ended up raising over $1,000 for the Susan G. Komen Foundation.”

Paxico’s businesses aren’t the only ones donating to the fallen officers’ families. DesRuisseaux acknowledges that the town is part of the greater Topeka community.

“Some of the business owners are Topeka residents or they have been at one time, and they consider themselves part of the greater Topeka area, so they all wanted to help out,” he said.

Paxico’s Shop for a Cause is joined by local businesses within Topeka’s city limits, which have responded united in helping Cpl. Gogian and officer Atherly’s families and the Topeka Police Department as a whole after the tragedy.

Restaurants such as the Burger Stand, Pizza Pub, and Blackbird Espresso Bar and Bistro are receiving donations for the families over the weekend.

Memorial services for the fallen officers were held in Topeka Saturday at the Kansas Expocentre, in which city manager Jim Colson, Rev. Tobias Schlingensiepen and Topeka Police Chief Ron Miller spoke to crowds of uniformed officers and members of the Topeka community.

“I am proud of how we, as a community, have come together to support the families of our two fallen officers,” said Colson.

DesRuisseaux sees raising money to benefit those in uniform as an easy choice to make.

“To me, there’s no question. My grandpa was a firefighter, a lot of my cousins are firefighters or policemen. It’s just what you should do.”

He also reminds the community to be thankful for everything the police force does for its citizens.

“We need to remember that it’s easy for any of us to say if anything happens to call 911, but somebody’s got to answer that call,” he said. “When people are running away from danger, somebody’s got to be willing to run to it.”