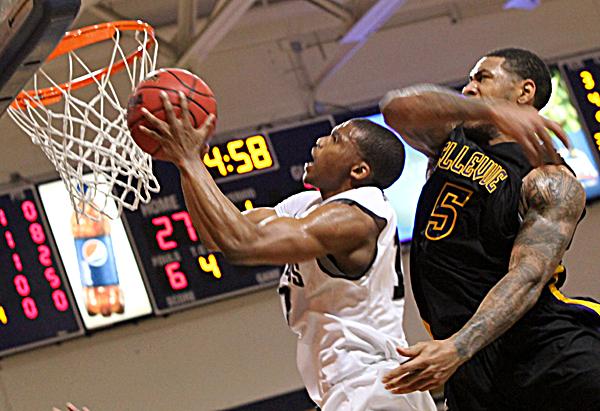 The No. 2 ranked Washburn Ichabods took on the Bruins from Bellevue University on Saturday at Lee Arena. The Ichabods used a 57 point second half to cruise to a win, 94-55.

Despite going the final 8 minutes plus in the first half without a field goal, the Bruins held the Ichabods relatively close in the first half, with a halftime score of 37-26. Washburn players mentioned a confusing game plan from Bellevue attributed to the close score at the break.

Senior guard, Will McNeill put up 34 points against the Bruins, which was only one point shy of his career high. McNeill also shot 60 percent from the floor.

“I never expected an opposing team to leave me open,” said McNeill. “I’m sure they read a lot of scouting reports; I like to drive the ball and get to the free throw line. Little did they know I can still shoot the mid-range. My teammates kept me confident, my coaches kept me confident and they told me to continue to shoot, and I did just that.”

“I just stayed aggressive and I don’t know why, but they left Will wide open,” said Bobby Chipman. “I know if he’s wide open he’s going to shoot it, so I’ve just got to crash the board every single time. Defensively, I’ve just got to keep myself in the right position and stay between my man and the basket.”

The Ichabods improved to 6-0 while the Bruins fell to 6-4. The Ichabods will open up their conference schedule on Thursday night at Lee Arena as they host the Southwest Baptist Bearcats, who come in with a 2-5 record.