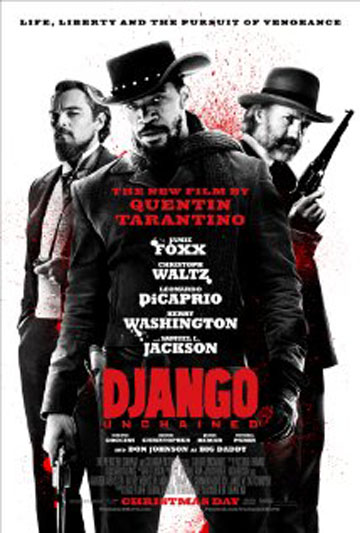 Django Unchained was better than I thought it would be. Honestly, I didn’t really know what to expect other than extreme special effects and gushing blood and gore. That, of course, was half of the movie. I mean, it is a Tarantino movie.

The plot was a little predictable, but only in the broader scheme of things – there were plenty of surprises throughout. It’s set back before the civil war and Django, played by Jamie Foxx, plays a slave who is freed by a German dentist named Dr. King Shultz, played by Christopher Waltz. Shultz is a bounty hunter for the United States government who needs Django to identify criminals who used to be Django’s owners.

Django is more than willing to help because not only is he freed in the process, he gets to enact revenge on his former masters. The plot thickens when we find out they are the ones who sent his beautiful, German-speaking wife away to a notorious plantation known as Candyland.

Part of the movie focuses on Shultz training Django to be a bounty hunter. Django is a natural and becomes a real asset to dr. Shultz and they grow close. Shultz seems to be of the mindset that skin color doesn’t matter, which puzzles a lot of the white characters in this movie. This movie had to be hard to make because of the time period it is set in and the language that had to be used. There were a few times I had to remind myself of the time period that it is supposed to be set in so I could enjoy the movie. I think that is what made the movie so good, the fact that there were no holds barred. Quentin Tarantino is good at that.

After killing the men Shultz wanted, he and Django decided to try and find Django’s wife, Broomhilda, played by Kerry Washington. Shultz was fascinated by the fact that she speaks German and this ends up playing a huge part in the main plot of the story – I will let you see the movie and find out how that works. They decided to go to the well-known plantation, Candyland, where Broomhilda is likely to be.

This is where Calvin Candie, played by Leonardo DiCaprio, comes in. This isn’t the DiCaprio the women swoon over, either. His teeth are brown, his hair is greasy and dirty, and his character is disgusting. This was a different character than what I am used to seeing DiCaprio play, and he did an awesome job. He grossed me out and I detested his character and that is exactly what Tarantino was probably going for. I read somewhere that DiCaprio was so into his character that he impaled his hand on a broken piece of wine glass in the scene where he is emphasizing his point. He kept going with the scene, and in the movie it’s visible. I actually remember wondering why he was bleeding and the answer is that it was random and not planned at all.

One especially memorable character from the move was Stephen, played by Samuel L. Jackson, the head house slave who seems to be Candie’s right hand man. Jackson appears older than he is and is hunched over, and is convincing as an old man. Stephen, though, is another one of those characters that you love to hate. He seems OK at first, but ends up showing his real colors soon enough. He plays a huge role in how the plot turns and I have mixed feelings about his ultimate demise.

The ending of the movie I will leave for you to find out. I recommend this movie, but if you don’t like gushy blood and guts, you might sit this one out, or shut your eyes – but then you’ll miss all the good parts.