Talking with a real calendar girl 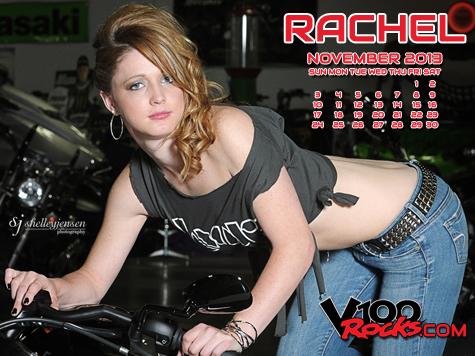 I love, I love my calendar girl

Being a Woman of V100 isn’t easy and to add full time school and two jobs to the mix would seem like too much to many people – but not to Rachel Talkington.

Talkington is a junior elementary education major who, in addition to trying to keep a social life and free time in her schedule, works full time at Family Service and Guidance Center as a respite care and attendant care provider, and Henry T’s as a waitress on nights and weekends.

A native Kansan, Talkington comes from a small town northwest of Topeka, just south of the Nebraska state line, called Morrowville, where she visits her family for holidays and throughout the year. She moved here five years ago to attend Washburn University and to pursue a degree in social work. Ultimately, she decided to change her major to elementary education and she plans to be a third grade teacher upon graduating. She started working at Henry T’s about three years ago, and Family Service and Guidance Center about a year ago.

“I work with the children [at FSGC] on specific goals they are trying to accomplish,”   said Talkington. “I have been working with 13 to 15 year olds. They just have a plan of things they want to accomplish, such as decrease being depressed, and we work on those goals.”

After working hard and getting good grades, Talkington wanted to do something for herself.

“It’s not something I expected myself to do,” said Talkington. “It’s something new. I didn’t really know what to expect, and that’s what I wanted, just something completely different. When I told my friends and family about, they were like ‘Why’d you do that?’ I just heard about it on the radio and thought it sounded interesting and fun.”

Topeka’s rock station, V100, holds a calendar contest every year called the Women of V100 Calendar, and Talkington decided to go for it. First, she submitted her photo to the radio station for people in the listening area to vote on. There was no way anyone could tell who was ahead at any time, so Talkington didn’t know she won, until she won.

The second step was for the top 30 girls to go to the studio for a second photo, only this time someone there, at V100, took the picture. A second round of voting occurred and Talkington was chosen as part of the final 15 ladies, and holds the November calendar month. This year V100 offered the classic poster, a limited edition 13-month flip calendar, and a limited edition sunglasses poster.

Coming from a traditional family, Talkington said this was a huge step outside of her comfort zone, and she worried about what her family would think.

Although some may frown upon the calendar girl competition, Talkington’s long time friend Tucker Stewart, K-State graduate and second year Washburn law student, thinks it’s a great opportunity for someone like her.

“It’s a good way to meet new people and represent the community at large,” said Stewart. “Knowing her personally, I think it adds to her value. She is not just a pretty face, she is intelligent and a good person.”

Stewart has known Talkington since she was in seventh grade. Then their high schools merged during their senior year – he lived in Washington and she lived in Morrowville.

“I love her to death. She is so enthusiastic,[and is] a very driven person in all reality,” said Stewart. “She can handle a lot of challenges, I have never seen her be down about anything in her life. She has an uncanny knack to cheer herself and others up.”

Talkington exhibits everything a calendar girl should, plus much more – a personality and a promising future. If you want a calendar from V100, either stop in at the station at 825 S. Kansas Ave. Suite 10, Topeka, Kan. 66612 or when V100 is out on location throughout the year. You can also view more photos of Talkington on V100’s website at www.v100rocks.com/page.php?page_id=451.