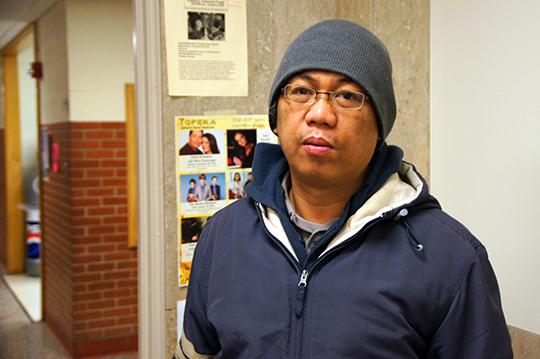 As many have probably noticed, Washburn University is quite a diverse place. Its students range from the more traditional post-high school coeds under the age of 20 eager for the college experience to nontraditional students coming back to school after years spent living or here to turn a new educational leaf.

Whether pushed by family, society, or more internal forces, the difference between traditional and nontraditional students begins, as most things do, at the beginning or in this case the start of school.

“To begin with, I told everyone what everyone says: ‘Oh, I’m going to take a year off,’” said Anson Tullis, a 26 year old sophomore majoring in biology and philosophy. “I had no idea what I wanted to do so I didn’t have a major in mind. I didn’t have a career in mind, so I took a break from school and pursued other interests. When I started taking some classes I realized how much I actually liked learning. I started studying and found stuff that I was more interested in and that’s kind of where I got my majors.”

Cloe Evans Wenger, a traditional freshman hoping to be accepted into Washburn’s School of Nursing, had a set idea of her career and her future in mind from day one.

“Basically I had all of my scholarships that were only valid if I started college within the next year,” said Evans Wenger. “I don’t want to wait. I want to get it done. By going straight into college out of high school, I have the opportunity to become a nurse practitioner faster than I would if I had waited a couple of years and it looks better on your nursing school application if you go straight into college.”

Her personal drive and determination has helped her push past familial ambitions in the hopes of becoming a first generation college graduate.

“I didn’t feel pressured because neither of my parents went to college and I wanted to further my education farther than my parents did,” said Evans Wenger.

Some students start off with the intention of becoming traditional students but are halted in their efforts by things out of their control.

“I failed to graduate my senior year of high school, and it took me another three years to do so,” said Skylar Schaeffer, a 22 year old sophomore and occupational therapy major who suffered an onset of a rare neurological disorder only months after her expected graduation date from high school. “I knew that I wanted to go on to college, so I applied to Washburn, and I got in. I feel like for me, I look younger so it’s not as much of an issue for me as it is for someone who’s 40. Part of me put it off, but I find my experiences with how it’s been being a nontraditional student haven’t been terrible.”

The biggest difference between the two classes of students seems not to be as much concerned with age and more concerned with what areas of life are being focused on and the reasons surrounding them.

“I think with nontraditional students generally speaking, it is true that they are there for different reasons,” said Corey Zwikstra, assistant professor in the English department. “Some are personal rather than professional, but they’re doing it for the education, the gaining of knowledge, the opportunity often to share their experience.  As a result those nontraditional students tend to be less concerned with grades less concerned with practical job stuff where as traditional students tend to focus less on the education. It’s less about ‘how am I learning’ and more about ‘how will this get me a job’.”

Zwikstra also noticed a difference in how these students participate and involve themselves in the classroom.

An argument could be made for the value of waiting after high school for a person to get their bearings before deciding what they want to do in life.

“I find it advantageous because most people, they don’t know what they want to do,” said Tullis. “They’re tired of high school or tired of school from being in high school and don’t necessarily take advantage of it or value it in and of itself. I actually have interest in the material and I’m also a little bit more mature, so I can relate to the professors better than most young people.”