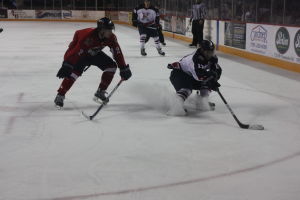 Saturday night, they didn’t get so lucky.

In a physically-minded game, Topeka (25-11) faced a daunting task of playing down three players for more than half the contest, losing one to injury, one to game misconduct and one to game ejection. Coupling that with a strong defensive effort from the Amarillo Bulls, Topeka never quite got into a rhythm, falling 3-1 at Landon Arena.

Topeka was able to sneak past Amarillo 1-0 in Friday’s game, but from the get go Saturday it looked to be a struggle. The physical play started early, as Amarillo forward TJ Sarcona received a 10 minute misconduct at 5:33 for checking from behind. Despite the penalty on Sarcona, the Bulls outshot the RoadRunners 18-4 in just the first period. Many of the shots came during a stretch where Topeka was forced to kill a five minute Amarillo powerplay after defenseman Kevin Patterson was given a major penalty for cross-checking at 9:48.

Forward Sean Gaffney’s penalty for tripping at 11:05 then put the RoadRunners down two men for a period of time before Amarillo was called for roughing at 12:08. This action culminated in a goal on the powerplay by forward Ryan Cole at 11:53 of the first period.

“It’s tough at home to lose a game like that,” said Scott Langer, Topeka head coach. “I thought our guys played extremely hard with only three lines and four defenseman, basically. It’s a tough one to win.”

He then went on to say he thought the team did as well as they could, given the circumstances.

In the second period, the odd flow of the game continued, as forward Tyler Poulsen was ejected for an obscene gesture at 1:49. Numerous penalties were called, resulting in both teams playing shorthanded for much of the period. Amarillo again stole the show in the second period offensively, outshooting Topeka 10-3.

The third period brought more balance to the contest, as each team fired 11 shots on goal. Forward Clint Carlisle looked to put the game out of reach just 17 seconds into the period, when he fired a shot past Topeka goaltender Spencer Viele.

Not to be outdone, at 4:16, forward Brandon Brossoit provided a spark for the RoadRunners, as his shot cut the deficit to 2-1. Over the next few minutes following the goal, Topeka had its best chances to tie the contest, but goaltender Paul Berrafato stood strong in net for the Bulls.

At 18:41, Amarillo finished off Topeka with an empty net goal from forward Gage Christianson.

Topeka will now face Corpus Christi this coming Friday and Saturday in the final two games of a six-game homestand. The RoadRunners have not faced the Ice Rays since Sept. 29, when they defeated Corpus Christi 3-1.

“We’ve just got to take it one day and one game at a time,” said Langer.