Moeller adds toughness on the boards 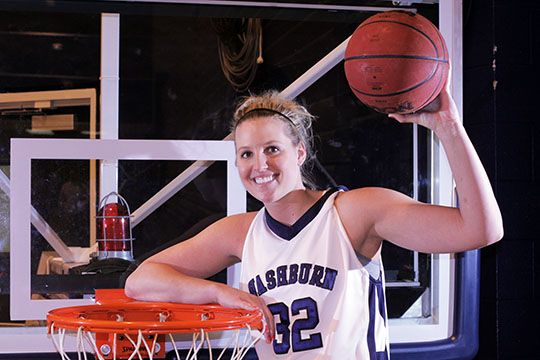 Senior Sierra Moeller took the long road, but the South Dakota native and Boise State transfer has found a place to call home at Washburn. After sitting out last semester because of eligibility issues, Moeller has gotten back on track.

Senior Sierra Moeller has had to battle some adversity since starting her adventure with the Lady Blues basketball team.

After transferring to Washburn from Boise State (Idaho) University, Moeller has suffered a torn ACL and a broken hand.

A two time all-league selection at T.F. Riggs High School (Pierre, S.D.), Moeller was named all-state as a senior and averaged 12 points and five rebounds per game as a senior. She led her team to a runner-up finish at the South Dakota state tournament.

Moeller averaged 3.8 points and 3.7 rebounds in just less than 14 minutes per game as a freshman at Boise State. She played in 32 games and totaled 120 points and 119 rebounds.

After her freshman year, Moeller was planning on transferring to the University of Kansas when she heard of Washburn.

“We were fortunate to be in the picture when she was ready to start playing again,” said Ron McHenry, Washburn head coach.

“I didn’t know anything about it,” said Moeller. “I just met with (McHenry) and we hit it off from the beginning. All I knew was that he’s a good coach and he wins.”

After sitting out a season, Moeller started two exhibition games against both KU and Kansas State University. In the KU game, she had 11 rebounds and 8 points. After just six minutes in the KSU game, Moeller suffered from her torn ACL that kept her out of the remainder of the season.

In 30 games her junior year, Moeller averaged 5.6 points and led the team with 6.7 rebounds a game. She collected double figures in rebounding seven times during the year. Moeller shot 41 percent from the field for the year.

Through all of her career, Moeller has proven to be a solid rebounder on both offense and defense. This season Sierra has played in 10 games and averaged 4.9 rebounds a game. She has recorded 49 total rebounds, 13 offensive and 36 defensive boards. Moeller said that it is a mentality of who wants it more when the ball goes up.

“Sierra is a very good rebounder,” McHenry said. “Her effort to get every rebound is what makes her a tough player to defend.”

Moeller had to sit out the first semester of this season, but it didn’t keep her from helping the team succeed.

“She just helped the new players understand the program and what was expected of them,” McHenry said. “She is getting her playing legs underneath her better every game out. She is starting to get more familiar with the post position and her teammates.”

Moeller is looking to her defense, rebounding, and senior leadership to be her staples to the team this season. McHenry said that Sierra will be a big part of how the team will do the last two months of the season.

“I hope to be the leading rebounder and just be an all-around leader for the team,” Moeller said. “I want to do the little things and make them add up to big things. Mostly I just want to have fun during my senior year.”