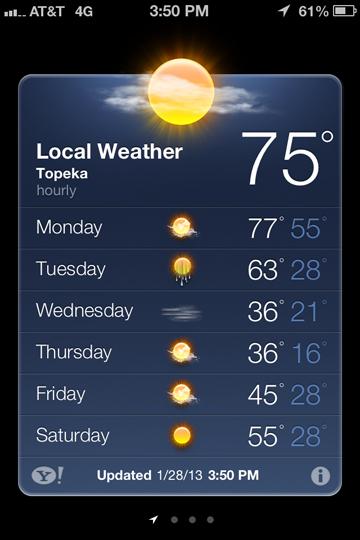 Students came down with a touch of spring fever this week, as temperatures climbed into the mid 70’s on Monday.  Some students were out in the record setting weather, wearing clothes normally packed away in mid January.

Nursing students, Kirstin Schaefer, senior, and Katie Cox, senior, were thrilled to be outside in shorts and sleeveless T-shirts. “ It beats having to be bundling up,” said Cox.

The women spent their afternoon on campus walking their dogs, Bella and Rascal. Both were hopeful the nice weather would stay around.

But not everyone was as optimistic that conditions would last.

“If you stay around in 30 minutes it will change,” said El Jazouli, alluding to a familiar Kansas weather analogy.

And change is right. Forecasts predicted temperatures to fall back to the mid 30’s with snow by Tuesday night.

Matt Miller, chief meteorologist at Kansas First News has a good explanation of what exactly is causing these extremes and how long it will last. Miller provided a summarization of this unusual winter weather event.

“The last couple of weeks, we have had a pattern where the Jetstream was far to the south over the Eastern U.S., continually dropping cold air into the eastern two-thirds of the country,” said Miller. “But the West and Southwest have been quite warm during that time. Over the weekend and for Monday, the winds shifted strongly from the West and Southwest and drew the warmth our way. Since it had been building down to our South and Southwest for several days, it was quite a contrast to the cold air we had last week. And for those who enjoy this, it’s unfortunately about to go away as the jetstream will again drop to the south and bring winter right back to Kansas.”