Elliott embraces her role, does the little things to win 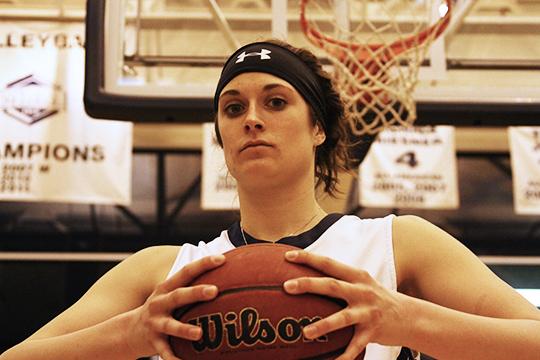 Senior guard/forward Dana Elliott may not light up the stat book, but the post turned guard has been a vital piece for the Lady Blues. Elliott leads Washburn in assists while playing 25 minutes per game, second only to Laura Kinderknecht.

Most people judge a player’s worth by statistical output, but for some basketball players like Dana Elliott who may not show up in the stat book often, her importance on the court cannot be calculated.

“She’s always been the kid who does what we ask her to do,” said Ron McHenry, Washburn women’s basketball head coach. “She kind of does all the dirty work. She’s always been a complementary team player. That’s hard to find this day and age.”

Elliott is a coach’s dream. The 5-foot-11 senior guard/forward has the length and strength to defend speedy guards, while still being able to bang with the trees down low.

“I feel that my strength is an advantage for guards because a lot of the guards that I defend aren’t as big or as strong, so it really puts me in a good position to control their movements,” said Elliott. “As a post I feel like I am a little quicker than some of them, so I use a little bit of that to my advantage as well. It is a constant battle when you are a post, because you are continuously muscling someone for position. I like that kind of competition, because it is usually something I can have an advantage in.”

McHenry likes how she does all the little things that coaches preach about, and it doesn’t matter if she is in the spotlight. To McHenry, players willing to sacrifice their bodies for little reward, besides a win, is hard to come by these days, especially when points are the only thing most people look at.

Whether it’s setting hard screens to get teammates open or diving for loose balls, Elliott is always doing something productive on the court for the No. 14-ranked Lady Blues. But this season has been a little different. The Wamego, Kan. product has had to make the transition from being primarily a post player to playing more guard this season for the Lady Blues. The transition has not been easy for Elliott who played mostly in the front court in high school and for the first three years of her college career.

“This year it is more of a struggle for me mainly, because I did play a lot more post last year than I am this year,” said Elliott. “I feel like I am more effective as a post than I am as a guard mainly because as a four I was closer to the basket, and I could get rebounds more easily and lay them in, as compared to this year I am more of an accessory player where I am not as effective in the scoring aspect. I feel like the post position is where I am more comfortable at and possibly even more effective at.”

Elliott may not be picking up as many trash points as last season, but she has taken on a new role for the Blues. Her point production has dropped from 4.8 per game last season to only 3.7 points per game this year. Instead of trying to score more, Elliott has been dishing out the ball more, leading the team in assists with 52, averaging 3.7 a game. Although she isn’t underneath the basket as much from the guard position, Elliott has still managed to pull down 30 offensive rebounds behind only Tiara George who spends most of her time on the low block.

“The only problem with her is that we want her to do more offensively, because we think she can,” said McHenry. “Sometimes I have to be mean to her to shoot it more. But Dana cares about winning whether or not she played a lot or scored a lot.”

As the season has progressed, the transition from a post player to a wing has gotten easier. Elliott has the capability to knock down shots from the perimeter and her ballhandling has progressed. But Elliott knows her role on the team and has embraced it.

“I am an accessory player and I am comfortable with that title,” said Elliott. “I am satisfied with my career at Washburn. I think I also made my family and hometown proud by sticking with basketball and completing my degree as well as finishing with an awesome season of basketball.”