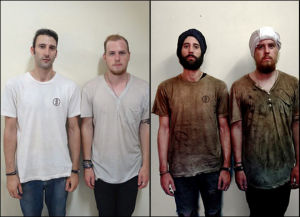 Recent Washburn graduate Tanner Ballengee decided to go on a trip to southeast Asia this past summer and record his experiences. This wasn’t an ordinary vacation, but an adventure where Ballengee and his friend Conner Morton had a motto and rules for the trip. The motto was “never pay for sleep,” which meant that at no time during the trip were they allowed to stay at a hotel.

“We didn’t have anything set in stone,” said Ballengee. “My only goal was to get over there and see to what happens.”

The trip started in Thailand, then to Vietnam where they bought motorcycles to ride from north to south through Cambodia and back over to Thailand. They then went back to Cambodia to sell the bikes, then back to Thailand to catch a flight that brought them to India. When Ballangee first arrived he experienced culture shock and was fearful about sleeping in a strange place.

“It was pretty scary at first hitting the highway and not knowing where you are going to sleep at night,” said Ballengee. “But you get used to it after awhile, it’s just sleep and I can just lay my head down anywhere.”

While in Vietnam they ran into a few corrupt police officers that pulled them over and demanded money from them, but they acted like they didn’t know what was going on and were eventually let go.

“In Vietnam and some places in India some of the police were really corrupt,” said Ballengee. “They’ll just pull you over and just demand money from you. You just have to act like you don’t have any money like you don’t know what’s going on and they’ll let you go.”

While in Nepal, India they also ran into a mishap when they decided to sleep in what they thought was an abandoned building but instead turned out to be government property.

“There was a time in Nepal where we slept in what we thought was an abandoned building but it turned out it was in a national park and we woke up to the military with AK 47s in our face demanding who we were and where we came from,” said Ballangee.

During the trip Morton was hit by a truck that broke his ankle, and they had to ride over 70 miles before they found a doctor that could help them.

“We had to go miles and miles to just find a hospital with an x-ray machine,” said Ballengee.

They found that a lot of the people in the other countries were very friendly and were fluent in English. There were times when they stayed at locals’ houses for days at a time.

“The language barrier was there, but there’s lots of people that speak English over there and even if they don’t speak fluent English they speak some so we didn’t have to hard of a time communicating with people,” said Ballengee.

During the three months, they met a lot of people with whom they became friends, but since he has been back he has not been able to talk to them. The thing that Ballengee realized the most when getting back to the U.S. was how clean everything is in America.

“The sad thing is with traveling you meet so many people, but in reality if you never go back to that place, you’ll never see them again,” said Ballengee.