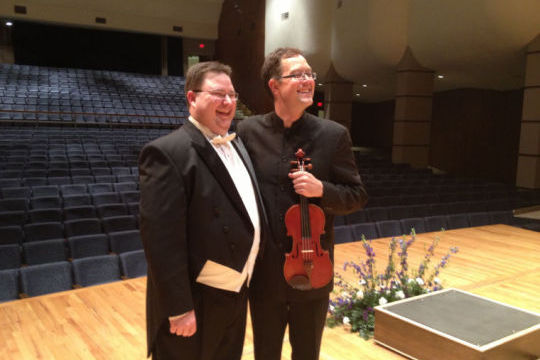 Chris Kelts and Brian Lewis stand together after their performance at White Concert Hall on Saturday. Kelts is one of five final conductors on the list to take over the conductor and music director for the Topeka Symphony Orchestra

Kelts is one of the final five conductors on the short list of potential candidates to take over the conductor and music director for the Topeka Symphony Orchestra, and he took the concert by the reins and drove the evening’s concert home. Should Kelts be appointed to the position, this would be the first conductor from Washburn to the TSO in 35 years.

The night’s entertainment was kicked off by the Menotti Violin Concerto played by Kansas native Brian Lewis. Lewis is a globe-trotting soloist, but a local legend: a winner of the Topeka Youth Talent Competition who has appeared on stage soloing with the TSO in the past. His stage presence led to good communication between the conductor and the orchestra, which in turn lead to a rich sound that filled the hall.

The Menotti Concerto is a rather unknown violin concerto among the live performed repertoire and is full of technically challenging passages, but Lewis’ communication with Kelts translated to a top-notch performance from both soloist and orchestra. More information on Lewis and his full performance schedule can be found at his website, http://www.brianlewisviolin.com/.

An impressive performance of a hard concerto would have been an achievement by itself, but Kelts turned around after the intermission to present Brahms’ Second Symphony. It is with this symphony that Kelts took the moment to shine. This 50-minute symphony is a monster among the repertoire, but Kelt’s musical insight took the TSO through the high lyricism and dramatic contrasts through all four movements of the piece.

Gordon McQuere, dean of the College of Arts and Sciences and music professor, is known for his particular affinity for Brahms’ music and offered his congratulations to Kelts on his outstanding performance. Dean McQuere is on the panel searching for the new TSO position and declined to comment much further.

“We were thrilled to have Kelts be a finalist for the position and I think we had an absolutely wonderful concert tonight and it is nice to have that Washburn connection,” said Kathy Magg, general manager for the TSO, and also a member of the selection process.

It is at this point that I would like to offer my own input on the matter of  Kelts being a finalist for the TSO Conductor and Music Director position.

I have sat with the cello section in the Washburn Symphony Orchestra and the Washburn String Orchestra, both under the baton of Kelts for the past three years. I know Kelts to have full understanding of many genres of music. His energetic demeanor brings exciting life behind the baton that translates to an active orchestra and dramatic sound. Many Washburn Orchestra students were excited for the night’s performance and could not wait to go to it and support Kelts. However, I wanted to know about why Kelts wanted this TSO position.

“I am interested in this job because it would be another avenue of music making,” said Kelts. “With the Washburn students I approach the Orchestras with a pedagogical mind set and with the TSO I would approach the music making in a more professional level.”

Not only would Kelts be a wonderful choice musically speaking, but I would not doubt that he would be ready to charge the TSO toward a new generation of music lovers, not just in Topeka, but in the entire Northeast Kansas region. His involvement with Kansas City and other Missouri music outlets would most likely bring tourist dollars to the Topeka market. Additionally, Kelts’ involvement would likely be a great opportunity for Washburn as well, giving students a direct contact for a professional level job.

I urge the readers of this article to contact the TSO office at 785.232.2032 or at [email protected] to express your support for Kelts for the position of conductor and music director. Remaining concert dates for the 2012 – 2013 season can be found at http://topekasymphony.org/calendar.asp.