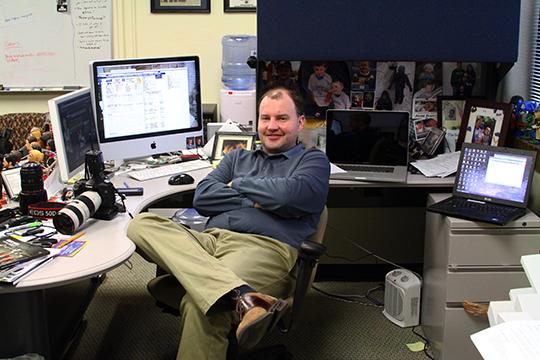 Most people probably don't know where the sports information is, but Gene Cassell spends much of his time in that back room in Whiting Field House. Cassell spends hours upon hours updating Washburn's athletic website, wusports.com, with little notoriety from fans.

After 19 years in the sports information business, Gene Cassell knows what he’s doing. Most of the work that he and assistant sports information director, Jeremy Wangler, do is viewed by many, but recognized by few. Every official stat one sees, every Washburn media guide one picks up, every press conference one sees, and every time one looks at the sports website, they’re looking at the un-glorified work of Cassell and Wangler.

Together, the two men try to answer every question may have about any Washburn sport or game. They’re at every home game and travel to as many away games as they can for every sport from August to May, which adds up to hundreds of hours away from their families and home.

The information they provide is crucial to one’s viewing experience, yet the time and effort they put in is often overlooked. Although, it seems as though Cassell prefers it that way.

When he was originally contacted for an interview, he was hesitant and said, “I can talk about our players but talking about myself is another thing.”

At the Division I level of NCAA sports, there is a sports information director for every sport and they deal with just the one sport all year. Whenever one season is ending and the next is beginning is Cassell’s busiest time of the year, especially in the spring. As the winter season is wrapping up the SIDs will be responsible for a total of seven different sports at once, including men’s and women’s basketball, men’s and women’s tennis, golf, softball and baseball. He believes most SIDs would agree with him when he says toughest part of the job is having to spend a lot of time away from family.

“Seeing my boys in the morning if we’ve got a road trip somewhere and then not getting back until after midnight so I only got to see them for maybe an hour in the morning,” said Cassell.

Even with the lost family time and the grueling hours, Cassell seems to genuinely enjoy his job.

In typical male fashion he laughed, saying that the best part of his job is that “I get paid to watch sports.”

While that is not all that he does, he recognizes that the Washburn coaches make his job a lot easier. He has heard “horror stories” from other SIDs discussing how hard their coaches were to work with and how difficult it could be to cover a sport. He is thankful that he has yet to run into any situation like that in his 15 years here and hopes that it continues.

The best memories Cassell has of being involved with Washburn sports are the two championship runs the men and women’s basketball teams had in 2001 and 2005. He said that it was particularly special when the men’s team let him cut down part of the net after their conference championship win last season in Kansas City because most SIDs never get a chance to something like that.

He enjoys the things that get national attention for the school, but he says that his favorite part of his job is

“Getting to tell a player that they made the All-American team and seeing the looks on their faces,” said Cassell.

This family man does a lot of work behind the scenes to make Washburn athletics run smooth and doesn’t always get the recognition for the time he puts in. Cassell is responsible for various little jobs like playing music during football pregames and assigning press passes to other teams or newspapers media people.

Look to see Cassell taking picutres along the baseline this basketball season.