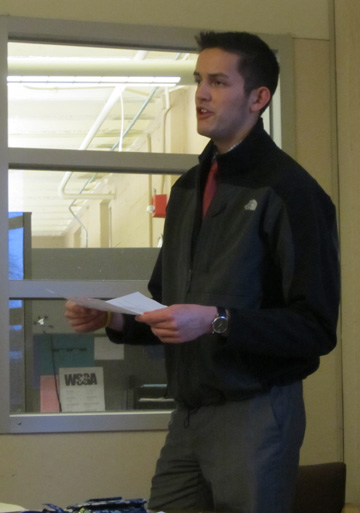 An informational meeting was held Wednesday, Feb. 27, for students wanting to run for open senate and presidential seats in Washburn Student Government Association.

Current WSGA president Eric Benedict spoke to a crowd of two dozen students about upcoming elections and the necessary steps and paperwork needed to run for the open seats. Students interested in running for senate and presidential/vice presidential positions signed up, and a full list of candidates for those positions will be available online this Friday.

“So far, I know of three to four legitimate teams running for president and vice,” said Benedict. “I’m very hopeful that we’ll have a better upcoming year.”

Registration and petitions for candidates are due on Friday. Candidates must have 100 signatures to officially run. Elections will be online at www.mywashburn.edu, and it will begin at 8 a.m. from March 6 – 8.

“This year’s an interesting one for elections because we have plenty of competition,” said Benedict.

In the past few years, WSGA elections have either gone uncontested or little competition has been present. This year, four teams have expressed interest in running for president/vice, and are eager to share their ideas in a debate setting.

A public debate has been scheduled for 8:15 p.m. Tuesday, March 5 in the Mabee Library. At least four teams of two candidates each were slated to appear at the debate.

“Shelbie’s a very effective debater and a hard worker,” said Moya. “It’ll be exciting to debate against her.”

Konkel is running for president with junior biology major Jessie McGown. They’ve been working on their campaign since the beginning of February, and have a website up to keep people informed of their ideas and platform, here is the website, http://konkelmcgown.com.

“We have three major areas of work: engagement, accessibility, and efficiency,” said Konkel. “All three of those areas need improvement from the ground up.”

Senator positions are also open, inviting some rookies to the table of student politics. Senior psychology major Jean-Luc Chinal is running for his first-ever senate position.

“It’s unsettling at first, thinking of all the mechanics of the position,” said Chinal. “But I look forward to it. It’ll be a good chance for me to get connected to campus.”

Again, registration and petitions are due to the WSGA office on Friday. There is a scheduled debate in the Mabee Library at 8:15 p.m. Monday, March. Elections are March 6 – 8. Students can vote online at www.mywashburn.edu; the polls open at 8 a.m.

Both sets of candidates have Facebook pages for their campaigns. Click here for the Konkel/McGown page and here for the Sonnich/Moya page.