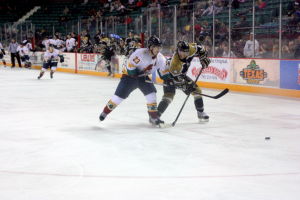 By the end of it all, it seemed like a different game all together.

The Texas Tornado, armed with a strong showing late, came back from a 3-0 deficit and a 4-2 deficit to win 5-4 in a shootout at Landon Arena.

The heartbreaker came with 29 seconds left in the third period, as forward Scott Conway scored the tying goal for Texas to make it 4-4.

Topeka head coach Scott Langer said the loss was tough to swallow after Topeka was up early.

“All the sudden we started making a few turnovers and (the Tornado) started upping their game and we lost our structure,” said Langer.

The RoadRunners looked hard to beat early. Forward Tomas Nechala, who had the game-winning goal in the shootout Friday, started the scoring at 3:43 on a quick wrist shot.

Less than a minute later, at 13:48, Texas made it 3-1. But Topeka still looked to be in control going into the first intermission.

The second period looked a lot different. At 11:15, Texas cut the lead to 3-2 as forward Justin Greenburg scored on the powerplay. Forward Sean Gaffney scored at 13:18 for Topeka, but Texas held a 10-3 shots on goal advantage and looked to be gaining momentum.

In the third period, forward Brandon Hawkins scored at 14:13 to cut the lead to 4-3 before Conway’s tying goal.

In the shootout, Nechala had a chance to keep Topeka alive in the fifth round but was stonewalled by Leisner to preserve a Tornado victory.

“I felt like (Texas) really picked it up and played a real good game in the second half,” said Langer. “They did a great job with their approach and we had some breakdowns. We weren’t good enough to get the two points tonight with the way we defended in the second half of that game.”

The series equals out to a “playoff” series, since the two teams are guaranteed to play one another in the first round of the NAHL postseason. With that mindset, Langer said his team has to put the game behind them, as the teams play again at 6:05 p.m. Sunday.