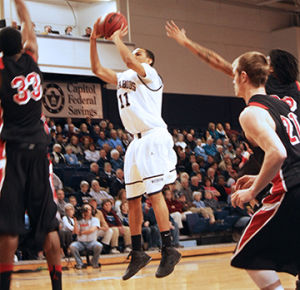 The Washburn Ichabods entered a hostile environment at White Auditorium in Emporia, Feb. 28. The Emporia State Hornets (13-12, 8-9 MIAA), were ready to avenge a seven point loss from earlier in the season in Topeka. They did just that as they downed Washburn, 61-55.

Washburn went 8-8  from the free throw line in the first 20 minutes and the Ichabods shot only 21 percent from the field in the first half. The Hornets led 27-21 at the half-time break after finishing the half on a 9-0 run, holding WU to no field goals for the final 5:17.

The Hornets were up by six with 1:49 remaining in the game, and Will McNeill hit two free throws. ESU hit two more free throws before Kyle Wiggins drained a 3-pointer with 23 seconds left. The lead was 58-55 when ESU made three more free throws to put the game out of reach for the Ichabods.

McNeill led the team with 27 points. He went 10 of 14 from the free throw line and added six rebounds and four steals. Joseph Smith was the only other Ichabod to reach double figures as he recorded 12 points. Bobby Chipman added nine rebounds and had two blocks for his team.

Washburn responded well to the ESU lost. The Bods (19-7, 12-6 MIAA), locked up the No. 3 seed in the MIAA Tournament in Kansas City after they beat Central Missouri (19-7, 13-5 MIAA), 95-78. The 95 points were a season high and it was highlighted by Will McNeill’s 40 point game. It was an exciting win on senior night to put the Ichabods in a good spot in the MIAA tournament. They will face Central Oklahoma at 8:15 p.m. on Thursday at the Municipal Auditorium in Kansas City. Central Oklahoma beat Southern Baptist on Monday.

McNeill hit a 3-pointer from the top of the key to end the half, giving him 23 points as Washburn took a 46-33 lead over the Mules. McNeill went 9 of 14 from the field while going 2 of 3 from the three-point range.

“That first half was as good a first half that I think I’ve seen by anybody at any level,” said Bob Chipman, Washburn head coach.

Washburn dominated the Mules in the second half, finishing with a 16-point win. McNeill added 17 more points to his total, making his 40 points the most points by a Washburn player in Lee Arena, tied with Dan Buie from 1996.

This was a career-high for McNeill, this performance moved him into third place on the all-time Washburn scoring chart passing Ewan Auguste, Harold Brown and Ryan Murphy with 1,667 points in his career. Only No. 2 Tom Meier (2,082) and No. 1 Gary Carrier (2,626) have scored more points as an Ichabod. McNeill added four steals and four rebounds to his performance.

“It felt so good man. I have to thank God for letting me come out and perform like I did tonight,” McNeill said. “I knew it was an important game and that I knew that I had to come out and be aggressive.”

Chipman finished with 12 points and 11 rebounds. This was his seventh double-double of his career. Martin Mitchell recorded 10 points, five assists and Christian Ulsaker put up 10 points, five rebounds for his team.

Widgett Washington had 21 points to lead CMU and Charles Hammork had 16.

Washburn hit 50 percent from the field, going 34 of 68 shots in the game. The Mules went 24 of 64 from the field and 18 of 24 at the charity stripe. Washburn only turned over the ball five times as they forced ten turnovers by the Mules.

The only other meeting this year between the two teams came back on Jan. 5 in Edmond, Okla. This game ended with the Ichabods on the losing end of a 72-67 score.

That was a phenomenal game,” said Chipman. “It was just one heck of a team win. Great way for the seniors to go out.