‘To the Stars’ reading to be at Mabee 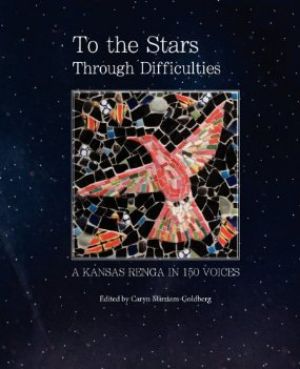 Students with an ear for poetry may want to head over to the iRead lounge at Mabee Library on March 7 for selected readings from the book, “To the Stars Through Difficulties: A Kansas Renga In 150 Voices.”

A labor of love by Kansas Poet Laureate Caryn Mirriam-Goldberg, “To the Stars” follows an ancient Japanese poetic form called the “renga.” A renga is a collaborative poem where each poet writes a 10-line portion (the opening stanza became the basis for the modern haiku form of poetry.) Usually following a nature theme, each poem builds on an idea in the preceding poem. And so it goes, through 150 Kansas poets; some laureates, some unpublished amateurs in this follow up to “Begin Again,” which marked the state’s sesquicentennial back in 2011.

The name “To the Stars Through Difficulties” is, of course, a translation of the Kansas state motto, “Ad Astra Per Aspera” but was also chosen to indicate the perilous state of the arts in Kansas. Budget cuts eliminated the Kansas Arts Commission (and made Kansas the only state out of 50 without an arts agency) and it wasn’t until a year and a half later that the poet laureate program found a home with the Kansas Humanities Council.

“I think it would be exciting for students to come to meet the Kansas poet laureate and also hear the other remarkable readers who are going to be on the panel,” said Deborah Altus. “I think it’s gonna be a wonderful event to celebrate Kansas and to look at it from a lot of different vantage points.”

This is the second attempt to perform the reading, as the first was canceled due to the snowstorm that hammered Washburn’s campus earlier last month.

“The event is being sponsored by the Center for Kansas Studies,” said Altus. “I really appreciate their sponsorship of the event. They’ve been really helpful.”

The event is free and open to the public. Refreshments will be served. For further details, contact Altus at 670-1951.

Readings from the work are happening across the state through May.