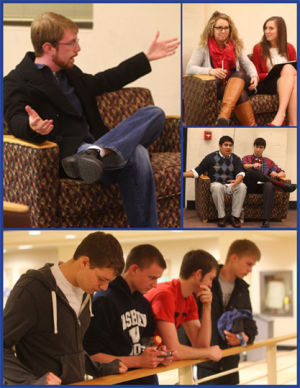 WSGA president and vice-presidential candidates met once again for a follow-up debate in the lower level of the Memorial Union on Wednesday night. The debate was in town-hall style.

Gary Handy, assistant director of Student Activities and Greek Life, moderated the debate which about 30 people showed up to hear the candidates’ debate.

“I enjoyed this debate, this style,” said Handy. “It’s a good opportunity for the candidates to voice opinions and share ideas.”

Presidential candidates Mike Kitowski and Shelbie Konkel were in attendance, along with Konkel’s running mate Jessie McGown. This year’s write-in candidates, Alex Sonnich and Ivan Moya, were also in attendance. Due to their write-in status, Sonnich and Moya were not allowed by WSGA’s constitution to participate in Tuesday night’s formal debate. Wednesday’s town-hall style debate was set up to give them a voice in this week’s elections.

“I think we should host something like this more often,” said Sonnich. “Having a town hall meeting with students and WSGA staff every so often is a good idea, just to keep the conversation flowing.”

Each team had two minutes to answer the question directed to them. Questions regarding fiscal discipline, including the raise in tuition, and the cultivation of future ideas dominated the debate.

“Tuition is never going to go down, let’s be honest,” said Kitowski.

Each team promoted fiscal responsibility, but with different details to support their platform. Kitowski assured students that Washburn is “still a good bang for your buck,” while Moya offered a proposal for being financially responsible on a micro-level.

“We would cut our personal salaries as President and Vice in order to send a message,” said Moya. “It shows that we’re willing to make a small sacrifice to re-evaluate the budget.”

Konkel, who has served on WSGA executive staff for three years, countered that WSGA has a “healthy budget, but they can’t find ways to spend it appropriately.” She also said that cutting the President and Vice’s salaries would put them below state-mandated minimum wage.

“The amount I get paid from my salary is enough for rent and food, and that’s it,” said McGown, also a three-year member of WSGA. “You have to make it known that it’s a valuable job. You can’t just cut wages and expect the same level of work quality.”

The idea, according to Moya and Sonnich, is to send a message of fiscal responsibility by participating in it actively.

“We’re just asking, why hasn’t it been done before,” said Sonnich.

The issue of finances continued with an audience-fielded question about the touch-screen consoles scattered throughout the Memorial Union. The consoles are meant to be used as information centers for visitors or those unfamiliar to Washburn. The university spent $44,000 to install them, and the question was concerning whether or not they were a wise purchase.

Konkel and Kitowski made it clear that the consoles were not purchased with WSGA money, but rather through university funds. Konkel said that she would reconsider the usefulness of the consoles, but Kitowski approved of them.

“I think they add to a culture of technology on campus,” said Kitowski.

Sonnich and Moya disapproved of the consoles, citing that their arrival came at the same time as the printing charges in Mabee Library.

The subject turned from finances to principles and work ethic. The candidates were asked about their first week in office, and what that would entail. Kitowski simply stated that he would “wake up and go to work.” Konkel and McGown would focus on “zoning in” the needs of the WSGA office, and Sonnich and Moya said they would “get the ball rolling” on their ideas, joking that they would have “binders full of platforms” to work on.

The final question of the night came from a student who simply asked, “what are you going to help me do?” Every candidate echoed the same general statement: “tell us what you need help with.”

Konkel and Kitowski both said they would expand current programs like Washburn’s Safe Ride, iSave and iAlert, to make them more well-known amongst students. Sonnich and Moya said they would participate in some of those programs, in particular the tutoring program in Mabee, in order to promote them.

In closing, each candidate shared one final thought for the students to go home with.

“I’ve enjoyed this debate, especially the civility of it,” said McGown. “I think it’s been a very productive evening.”

Sonnich and Moya reminded students that due to their write-in candidacy and ineligibility, they cannot actually accept the president/vice positions if they won. They did, however, encourage students to vote and express their opinions in political matters.

“Every time you vote for us, it’s a win for our ideas,” said Moya.

The end of the debate, however, was not quite the end. As soon as Gary Handy thanked everyone for coming, Sonnich moved his couch over, revealing a Nintendo 64 hooked up to the big-screen TV. The candidates then had an impromptu Super Smash Bros competition.

“Super Smash Bros is always a good way to get some friendly competition flowing,” said Daniel Fleming, freshman criminal justice major. Fleming enjoyed this style of debate, including the Nintendo 64, more than the formal debate on Tuesday night.

“I think it went very well,” said Fleming. “The candidates seemed to be fair to each other, and enjoyed their discussion.”

The polls are open on MyWashburn.edu until Friday, March 8.