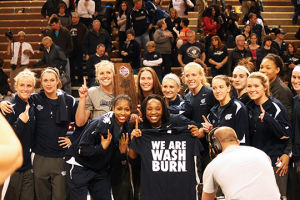 The Washburn Lady Blues (22-4, 16-2 MIAA) topped the Central Missouri Jennies (22-4, 14-4 MIAA) in a 59-53 win on Senior Day March 2 at Lee Arena. The win put Washburn atop the MIAA standings and won the conference title outright. The Lady Blues also received the No. 1 seed in the MIAA postseason tournament in Kansas City’s Municipal Auditorium.

Lavonda McCall was 5 of 7 from the field and 11 of 14 from the charity stripe as she totaled 21 points.  She added eight rebounds and three assists in the game, leading the team in both categories.

“Yeah I try to attack,” said McCall. “I try to go to the basket and score but also go to the free throw line and score. I wanted to give my seniors, not just to tie (for the MIAA crown), but get the first seed.”

Halfway through the first half, Washburn led 19-7, but the Jennies cut the lead to single digits and even tied the game at 21 all with 4:46 to play in the half. Forward Laura McMullin scored the last six points of the half to give the Lady Blues a 29-25 lead for the first.

Then, with 3:55 left in the game, Keuna Flax made a pair of free throws for UCM to cut Washburn’s lead to three, 52-49.  Then WU went on a 7-1 run when Tiara George hit a jumper before McCall made a free throw. Then George sunk another jumper before Flax hit one free throw. Laura Kinderknecht put the game out of reach when she hit two free throws to give the Lady Blues a 59-50 lead with 56 seconds left.

A rebound corralled by Dana Elliott with 35 seconds to go put WU at the free throw line, but both free throws were missed and UCM capitalized with a 3-pointer. This put the Jennies within six points, 59-53, with 13 seconds left. This was all UCM had as the Lady Blues held on for the win.

McMullin came off the bench and went 4 of 5 from the field, putting up nine points as Washburn’s second leading score behind McCall. The Lady Blues received their first place MIAA trophy and cut down the nets when the men’s game was finished.

“It was not real pretty at times, but good enough,”  said Ron McHenry, Washburn head coach. “Give kids credit for that. It’s a hard game to play.”

The Jennies outrebounded and forced more turnovers than the Lady Blues did. CMU had 44 boards as WU grabbed 40. Central Missouri forced 10 turnovers, while Washburn forced seven. The Lady Blues did block more shots, as they blocked seven shots to CMU’s two. WU was led by George who blocked three shots.

Flax was the leading scorer for the Jennies with 18 points. BreAnna Lewis had a double-double with 11 points and 12 rebounds.

Washburn will play Friday at noon in Kansas City, Mo., at the Municipal Auditorium in the second round of the MIAA tournament. They will face the winner of the No. 9 Northwest Missouri State and No. 8 Missouri Southern State game.