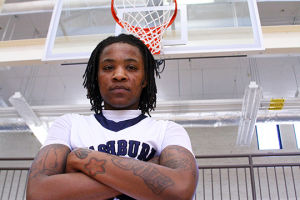 Most people would agree logic says that the second leading scoring and leading rebounder of a basketball team should be on the floor as much as possible.

When that person has to miss some time due to an illness, most of those same people would also expect a drop off in production from the team.

Unexpectedly, however, the Washburn Lady Blues excelled without the contributions of starting center, Tiara George. When she was able to return to the floor she found herself out of the starting rotation. She, and some fans, were somewhat surprised to not hear her name called in the pregame introductions, and it’s easy to see why.

Despite being seventh on the team in minutes per game at just 16.8, George leads the team in rebounding at six per game, blocks with 38, and second in scoring averaging nearly 10 per contest. George is also second in shooting percentage at 55 percent, which is 6 percent higher than any Lady Blues player.

The decision to sit George wasn’t a punishment from Coach Ron McHenry. The way he saw it, the decision was entirely evidence based.

“We were winning with the rotation we were in, and I think it has helped her as far as getting settled into the game better,” said McHenry.

George has handled the move well and hasn’t seen a drop in production despite the slight drop in playing time. She also seems to have not lost an ounce of confidence in her game.

“As you can see, it doesn’t matter who starts,” said George. “It’s who finishes. So if we got the win at the end, then let’s just keep moving along.”

Whether it’s off the bench or in the starting lineup, George is an undeniable contributor for the Lady Blues, especially on the offensive end of the court. George knows what she is good at too.

“My offense,” she said. “I make sure I take good shots. I never do anything out of my game. I stay within my game and my duties on the court.”

McHenry seems to agree with the Baton Rouge native and was quick to sing his praises of the expert post scorer.

“She is an outstanding offensive player,” said McHenry. “Her skill level offensively is as good as we have had here.”

McHenry’s Lady Blues (22-4) won the regular season conference championship with a win over the University of Central Missouri this past Saturday. The win also secured the number one seed in the MIAA postseason tournament. They will take on the winner of Northwest Missouri State and Missouri Southern on Friday in Kansas City, Mo., at Municipal Auditorium.