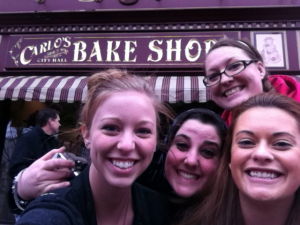 Members of Student Media were all over the country last week – some in New York City, others in New Mexico and one in Las Vegas and California. Another member won a beauty pageant right here in Kansas.

Spring Break was the perfect chance for Student Media to get away from it all and take a break from the hustle and bustle of the news room.

Eight members of student media, plus their adviser Regina Cassell took a trip to New York City for a College Media Association conference. The conference featured media professionals from around the country, high level executive keynote speakers, thousands of students from colleges across the country all in the heart of Manhattan. There were 250 unique sessions planned for two days and the students learned a great deal of information to help them in their media careers.

“My favorite part of the trip was what I took away from it,” said Farai Harreld, writer for the Review. “I loved how all the speakers had a visible passion for the work they were speaking about such as how to be self sufficient as a freelance writer or how your online presence affects your chances of being hired by future employers.”

The group utilized one of Washburn’s Transformational Experiences in order to afford the trip. The program will provide the means for Student Media to use the information learned from the conference to create a training module for students in the future to utilize. There are various forms of WTEs and Student Media utilized the cultural WTE and each student had to participate in a cultural aspect on their New York trip. Kaya Norton went to see Phantom of the Opera on Broadway, Tricia Peterson ate at various New York restaurants, including one in China Town. A group of students went to the Empire State Building. Another student attended various comedy clubs.

“It was a great experience,” said Kelly Hurla, senior mass media major and Arts and Entertainment Editor for the Review. “I loved getting to see several comedians in each show. While I didn’t find every one to be particularly funny, I wouldn’t change it. It was all about putting yourself out there and being confident.”

New York was not the only destination for members of Student Media. Other members used Spring Break to get away from it all, as well.

Linnzi Fusco and Mike Goehring went south for their vacation and found themselves in Alamogordo, New Mexico at White Sands Monument. They didn’t originally plan to go there, but stumbled across it online and found it interesting so headed there. Their trip wasn’t the typical tourist vaction, but one where they could take photos of beautiful landscapes.

“So I had some extra money and the timing was right and I always wanted to go on a photo trip where I just traveled and shot photos,” said Goehring. “So at the last minute I told [Fusco] and she was in. I originally wanted to go to Arizona but [we] ended up going only to New Mexico.”

White Sands isn’t an ordinary desert, mostly because the sand isn’t typical sand. The white powdery stuff is actually gypsum crystals, not grains such as those found on a sandy beach. Gypsum is water-soluble so this is why White Sands is incredibly unique. Not a lot of water falls in this part of New Mexico and the little that does fall accumulates and evaporates.

“We spent most of our time there just enjoying the weather, scenery of the white snow-like dunes and the mountains in the distance followed by an awesome sunset,” said Fusco. “We took dozens of pictures and played in the powdery sand before heading to our hotel. I am definitely going back there someday. I want the dunes in my back yard.”

Kayla Norton stayed in Kansas and won the title “Miss Sunflower” in a pageant. Norton has competed in pageants off and on since she was five years old.

“It is important to me because my dream has always been to be a queen and have always looked up to the Miss America program,” said Norton.

Next, she will be competing in the Miss Kansas Pageant June 6 through 8. She will be participating in a number of volunteer opportunities and fundraising events in the future during her representation of Kansas.

Abigail Mies went to Las Vegas, NV and California. In Vegas she walked up and down the strip and checked out the casinos. Another day she visited Lake Mead, which was formed because of the Hoover Dam and is the 16th largest man made lake in the world. In California she went to Disney Land and rode rides and checked out the beach. The water was cold, but the sun was not.

Richard Kelly went to Dallas, Texas to see over 30 of his favorite bands at South By So What. The event included four stages and lots of headbanging and mosh pits. Kelly got the worst sunburn of his life at the event.

“It was so worth it though,” said Kelly. “I was able to meet some of my favorite musicians.”

Student Media had a fun-filled Spring Break and to check out more photos of their journeys visit the website at washburnreview.org.